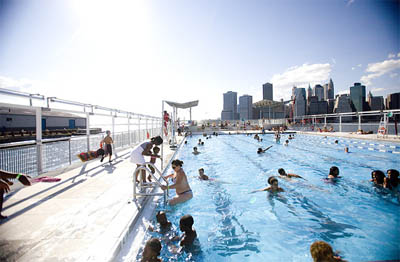 According to the Post, the Parks Department has confirmed that the "Floating Pool Lady" will be towed to another borough next summer.

About 70,000 swimmers will have enjoyed the barge-borne pool on the Brooklyn Heights waterfront by the time it closes on Labor Day. Having opened during the rainstorms of July 4, it became a popular attraction reminiscent of the Water Taxi Beach in Long Island City. Its creator also sees it as a revival of the city's 19th-Century public swimming baths, minus the Victorian full-body beach garb. We do wonder if part of the reason the pool may move is because some Brooklyn residents didn't want it in their backyard.

Anyone out there have the inside word on which neighborhood gets the barge next summer?