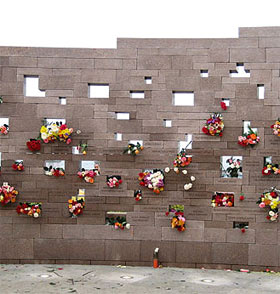 Yesterday, people gathered for the sixth anniversary of the fatal American Airlines Flight 587 crash in Belle Harbor, Queens. It was the second deadlist aviation crash in U.S. history, with 265 victims. Mayor Bloomberg led the ceremony, saying, "Once again, we have come together to remember all of them, and to share the sorrow that all of us feel."

On November 12, 2001, the Dominican Republic-bound plane had taken off from JFK Airport; turbulent air led the co-pilot to use the rudder to keep the plane up, but the rudder broke off. All 260 people on board - 251 passengers and 9 crew members - were killed when the plane crashed into the quiet residential neighborhood. Five people on the ground were also killed.

Last year, a Flight 587 memorial was dedicated in the Rockaways at 116th Street and the boardwalk, which is not the actual crash location. Instead, houses damaged from the crash at Beach 131st and Newport Avenue were rebuilt; only a small marker notes that it is the crash location.