The National Transportation Safety Board has begun to inspect the left engine from US Airways Flight 1549, which landed in the Hudson River on January 15, after its engines failed. Investigator Robert Benzon said, "We'll see how it was affected by bird strike." The engine had been lodged in the Hudson and was found by sonar—the NY Times says readings found "cone-shaped object at the end of what looked like a long skid mark, roughly in line with 52nd Street."

According to Newsday, it took 20 minutes to raise the engine. Benzon said the engine recovery "was a little harder than we thought. The divers did a great job." There were no apparent signs of feathers on the left engine, but a feather and "organic material" were found on the plane's right engine (which was still attached to the plane), suggesting that the pilots' account of a bird strike may be substantiated. Who will help identify what bird(s) hit the plane? Apparently Smithsonian's National Museum of Natural History in D.C. (Bird CSI: DC?)—the Times explains, "Identification both by feather structure and by DNA will be performed." 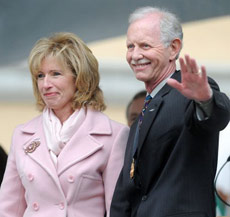 And Flight 1549 pilot Captain Chesley "Sully" Sullenberger was given a hero's welcome in his hometown of Danville, California. Sullenberger spoke publicly for the first time, thanking everyone along side his wife Lorrie. He told the crowd of 2,000, "Lorrie and I are grateful for your incredible outpouring of support. It's great to be at home in Danville with our neighbors and our friends."

Sullenberger continued to be modest, "It was circumstances that put this experienced crew (in charge) of that plane on that particular day. We were simply doing the jobs we were trained to do," but Danville Mayor Newell Arnerich marveled, "He had two minutes to make a decision. That's 120 seconds — I can't even say my name that fast."

#bird strike
#engine
#flight 1549
#left engine
#miracle on the hudson
#ntsb
#us airways flight 1549
Do you know the scoop? Comment below or Send us a Tip
A new Gothamist is coming! We’ve moved comments over to our beta site. Click here to join the conversation and get a preview of our new website.