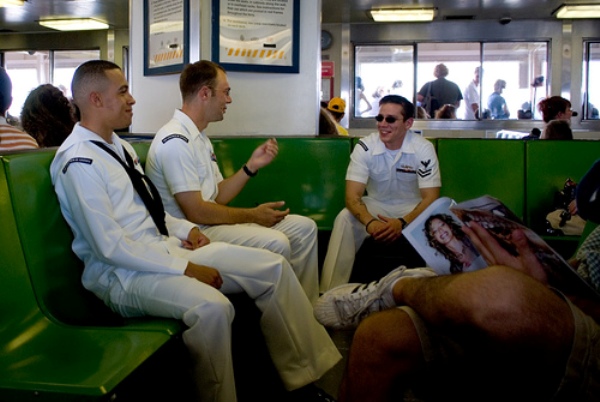 Thousands of Sailors, Marines and Coast Guardsmen will be descending on New York City as Fleet Week 2008 starts tomorrow. This year's flotilla includes five American warships and three Canadian ships, and there will be opportunities for the public to tour ships and see public demonstrations. 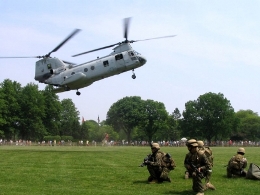 One of the more dramatic displays will be the U.S. Marins' helicopter raid demonstrations. Held in various parks in Queens, Staten Island, the Bronx, Long Island and Westchester County, an AH-1W Cobra, a UH-1N or a CH-46E Sea Knight, respectively, will perform an "area sweep of a landing zone...Once the helicopters have performed the sweep, Marines will slide down ropes from the helicopter and secure the landing zone by positioning themselves on the boundaries of the perimeter and sighting in with their weapons in case of any potential danger."

The ships are coming in at 9:30 a.m. (the Navy says locations include "Hudson River from Verrazano Bridge to George Washington Bridge; Narrators will be at Stapleton Pier, SI & Fort Hamilton") and they will be open for visitors-see here for more details. And the AP notes how the last time there was a full-size aircraft carrier, it was in 2005 because NYC "bars nuclear-powered craft from the harbor"--which means many of the newer Naval carriers are effectively banned.