Flatiron-Area Building - With Notorious Past - Collapses 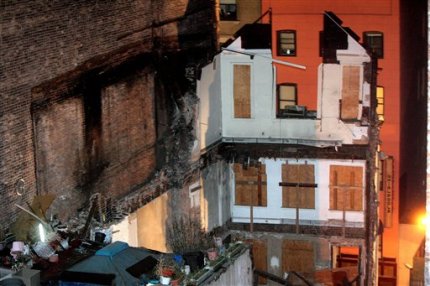 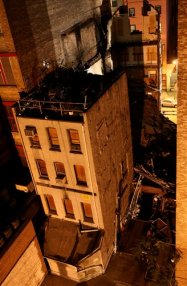 Last night, an unoccupied five-story hotel at 22 West 24th Street collapsed; no injuries were reported. The former La Semana Hotel "fell into itself leaving a giant, although relatively tidy, pile of rubble," according to the Post. Witnesses said the 8PM collapse sounded like a bomb explosion and that "floor by floor, the building simply gave in." A fire official told the NY Times, "If this happened during the daytime, during a workday when there are a lot of people on the street, I think we could have had a lot of injuries here."

The landmarked building was issued complaints and violations by the Department of Buildings on October 15 and October 17 after the Fire Department raised concerns over the building's stability. The front of the building is still standing. 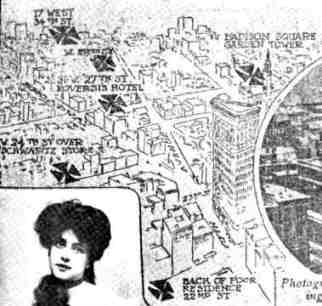 The building has an infamous past. Stanford White, the famed architect of the second Madison Square Garden (the one is Madison Square, now destroyed), the Cable Building (611 Broadway at Houston - where Crate & Barrel is located), and the Washington Square Arch, to name a few, had rented the 2nd and 3rd floors. There he had a red velvet swing, where he would allegedly swing young women and enjoy their company (he may have had many red velvet swings in various apartments around the city).

One of those women was Evelyn Nesbit, who White had seduced at age 16; her husband Henry Thaw later shot White on top of Madison Square Garden and the ensuing case was the "Trial of the Century." The West 24th Street rooms were one of White's many meeting places (see image at right).

The building is currently owned by George Vallario Jr., who was once charged with racketeering. And if you're interesting in learning more about murder of Stanford, Suzanne Lessard - White's great-granddaughter - wrote a fantastic book The Architect of Desireabout the scandal and how it affected the family.