Flatbush Locals Vow To Force 'Cornerstore Caroline' Out Of The Neighborhood

Community members, local politicians, and the family of Jeremiah—the 9-year-old boy who was wrongly accused of groping a white woman inside a Flatbush bodega last week—gathered outside the Sahara Deli Market for a rally and "community conversation" on Monday evening. The small rally created an opportunity for residents to vent their frustrations about this incident and rising tensions in rapidly-gentrifying neighborhoods.

"This has to stop," said Jason LittleJohn, the man who took the video. "I mean we don't mind the gentrification, but the racism—we will not tolerate this in our town. We should have not been out here crying that day. She has to leave the neighborhood, we will force her out of here. She does not belong in this neighborhood. I'm sorry this happened to you Jeremiah, I'm sorry this happened." 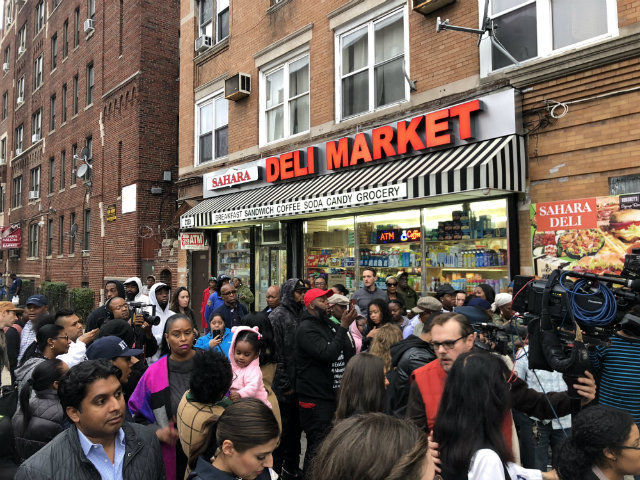 More than 60 people showed up for the event, which was organized by Brooklyn Borough President Eric Adams. "Our goal is to hear your voices and let everyone know what's happening," he said at the start. Well over a dozen people were given the chance to speak, including kids from Jeremiah's school. Some of the adults were angry about gentrification, some invoked the legacy of Emmett Till (the African-American child who was lynched in 1955 after being accused of offending a white woman in her family's grocery store). Other locals were angry at the politicians for their lack of action on another viral video incident from this summer, the one in which a fight broke out in an East Flatbush nail salon after a customer complained about a $5 eyebrow job.

But almost everybody expressed empathy for and anger on behalf of Jeremiah, the boy caught in the middle of everything. One of Jeremiah's peers named Jordan said, "I don't know why she thought a 9-year-old could harm her."

State Assemblymember Rodneyse Bichotte choked up as she spoke: "We know what happened to Emmett Till," she said. "We are not gonna relive this today, no way Jose. We are not, over our dead body. We are not going to let people come in and tell us how to live our lives." Bichotte added that lawmakers in Albany are drafting new legislation that would strengthen current laws against making false reports to 911. "I cannot imagine how traumatized this young boy is. Innocent, coming from school. And having to live this, having to live 1955, having to live the Jim Crow laws, having to live racism every day."

"If you want to raise your children together with our children, you are welcome," said Gerard Cadet, vice president of local union 1199. "If you think you are going to chastise our kids, you need to get the hell out." Another woman who identified herself as a teacher and anti-racism activist said, "We put a bunch of people in a melting pot without a proper understanding or ways to relate to each other, we get anti-black rhetoric or behavior projected onto us and our children."

Eventually, Jeremiah's mother, who ABC identified as Someko Bellille, spoke, describing taking her kids to the store last week when "this lady proceeded to intimidate, harass and antagonize me and my children."

"What happened to us respecting one another, having unity and being neighborly, did we forget that? With that day, this fear was placed into my children's heart," she said. "Having to explain to your 9-year-old son what assault means, what sexual assault means, and having to go over the term with him, what racism is. And having to witness and see he's crying all over again." She added that she didn't accept Teresa Klein's apology to her son: “I don’t forgive this woman at all. I think she was crazy. I think she had something going on with her."

Jeremiah, who was front and center for the entire event, broke out in tears multiple times over the course of the evening. Toward the end of the event, he spoke as well: "People should be treated equally," he said. "Treat people the same way you want to be treated."

After the event, Adams said Bellille had been reluctant to come forward due to the press attention, but he encouraged her to do so so the community could rally behind Jeremiah. "People need to vent," he said. "They need to be able to verbalize their pain, verbalize their anger. Because if you hold it in, then it could turn into a powder keg. And I've seen that throughout my years in policing...and we're going to do a series of these. We're going to go around and just get people to engage in dialogue."

Adams said he had not been in contact with Klein, but had spoken with the NYPD and DA's office, which are said to be investigating whether there was any criminality during the incident. That seems to hinge on whether anyone impersonated a police officer—Klein told Gothamist that Bellille had flashed a badge and threatened to arrest her, which is why she called police. But many locals, and Adams, allege that Klein was the one who was impersonating an officer, which seemed to be based on an interpretation of the dialogue in the video—Klein insists she said she was calling 911 "on a cop," not a child, and was quoting Bellille allegedly saying she was a cop.

When asked about Bellille allegedly flashing a badge, Adams said: "As the investigation goes its course, we're going to see that, based on what the mother's profession is, if she did—I don't know if she did—but if she did, she was in the right." Pressed on this, Adams wouldn't say what Bellille's job was: "I think that's part of the investigation. I don't know if doing that's going to tamper with the investigation. But I can tell you this: she did not do anything that was in violation of any rules or procedures. I know that for a fact. Now if the woman who was showing hostility, if she identified herself as a police officer or peace officer, she broke the law."

Adams also said he was underwhelmed by Klein's apology to Jeremiah: "She needs to start from a place of apology, an authentic apology—[she can't] apologize to the son but not to the mother. That is not an apology. You apologize to someone you identify you did something wrong to, and then you can start that conversation of healing. She's not even at the place of having a real apology for what she did." 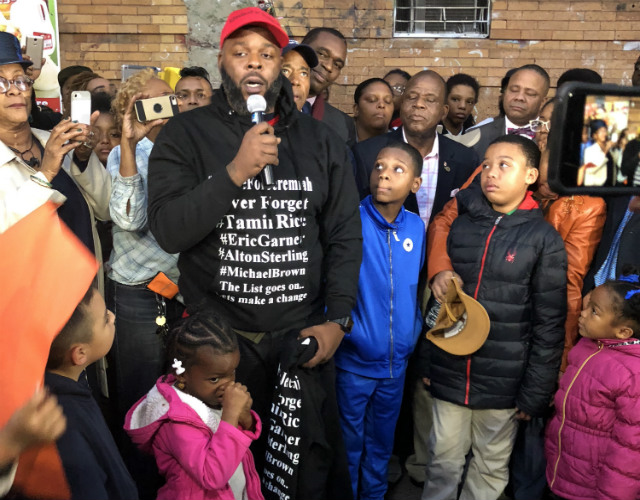 Jason LittleJohn, who took the viral video of the incident, speaks (Ben Yakas/Gothamist)

The story—which has been compared to other viral videos of white women, including “Barbecue Becky" and "Permit Patty," who called the police on African-Americans for specious reasons—was also featured on a segment on The Daily Show last night.