Flashback: The 1924 Democratic Convention Was A Violent, Racist Clusterf***k

After a protracted primary battle, the Democratic National Convention is finally underway in Philadelphia. Last night’s festivities included speeches from Elizabeth Warren, Michelle Obama, and Bernie Sanders, who began the parade of endorsements for Hillary Clinton.

Aside from the protestations of angry Bernie fans earlier in the day, there were no real surprises. Don’t hold your breath for much more drama this week, either. Tonight we’ll have Bill Clinton hopefully not doing something incredibly stupid and tomorrow night Mike Bloomberg will undoubtedly awe us with the charm and political acumen that got him nowhere near the White House. Everyone loves an Obama speech, but really, we already know that Hillary Clinton is going to be accepting the nomination on Thursday, and the party will leave the convention looking unified and competent, at least relative to the dystopian fever dream that was last week’s RNC.

If the specter of three more days of speeches has you longing for some spontaneous excitement, consider what it was like to witness a truly contested convention. Specifically, consider the 1924 Democratic Convention, which took place right here in New York at the old Madison Square Garden.

This spectacle saw the longest convention battle in history and featured fist-fighting governors, the Ku Klux Klan, and a spectacularly doomed effort to clean up New York’s reputation as an unfriendly and uncivilized city. (Historian Robert K. Murray, who chronicled the free-for-all in his book The 103rd Ballot, called the convention "the most acrimonious and bitterly fought event in the Democratic party’s modern history.") Raising the stakes on the whole thing was the fact that this was the first time that the Democratic National Convention would be broadcast over the radio. 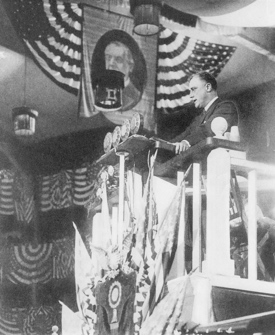 In retrospect, the mayhem of the convention was inevitable. A postwar economic downturn, the resurgence of the Klan, and the thorny issue of Prohibition had combined to expose deep fault lines long dormant within the party. Meanwhile, rapid population growth in major cities threatened to overwhelm the Southern and Western coalition that had dominated Democratic national politics since the late 19th century.

Going into the convention, New York Governor Al Smith and U.S. Treasury Secretary William Gibbs McAdoo of California were the clear frontrunners, but seventeen other candidates—most of them "favorite sons" with little hope for victory—kept either from securing the two-thirds of delegates necessary to win.

In disposition and political philosophy, McAdoo and Smith were polar opposites.

Born and raised in the tenements of the Lower East Side, Smith’s hardscrabble roots (he left school at 12-years-old to work at the Fulton Fish Market), his reputation as a drinker, and his working class accent (he pronounced the word "first" as "foist") did little to endear him to the rest of the country. He opposed Prohibition and the Klan and he was a Catholic in an era of increasingly virulent anti-Catholicism. While Smith was respected progressive reformer in his home state, his association with the Tammany Hall political machine also raised eyebrows for party faithful outside New York.

McAdoo, on the other hand, was a Protestant and staunch Prohibitionist from California by way of Georgia with strong Klan support. He painted himself as a values candidate, railing against alcohol, bankers, and political corruption. He also stood idly by as the Klan attacked Smith as "that Catholic from Jew York." (McAdoo himself had spent his early career in New York, first as a lawyer and then as president of the Hudson and Manhattan Railroad Company.) He was a staunch critic of the "eastern press," which often criticized his folksy references as "McAdooleisms" and referred to his collective following as "McAdoodledom."

Given these tensions, New Yorkers were perhaps overly sanguine about the city’s chances of showing the nation that it wasn’t such a nasty and brutish place. No less prominent a figure than Nicholas Murray Butler, president of Columbia University, expressed hope that a well-executed convention could "show our friends from other parts of the country what sort of a place New York really is and how it feels, in contrast with some of the things that are said about us."

In that pursuit, a committee was formed to hang streamers and flags along Fifth Avenue, with each block dedicated to a different state. Police rounded up the known pickpockets and threw them in jail for the duration of the convention. Movie houses offered discounts and amenities to newly arrived delegates, while restaurateurs advertised provincial dishes like Southern fried chicken and butterscotch pie.

The rebranding effort failed almost immediately. On the day before the convention began, newspapers across the country ran stories of delegates getting "robbed" by hotels, restaurants and taxi drivers. The city’s barely hidden speakeasies infuriated Prohibitionists—McAdoo moaned that his best men were "hopelessly drunk ever since they landed in New York." A group of fundamentalist Texas delegates considered going home after discovering that St. Patrick’s Cathedral was located on the block dedicated to their state. Other delegates complained that the city’s public transit was riddled with "rude natives, who were much more practiced at yelling and shoving."

On Monday, June 24th, the convention kicked off. Little of note occurred during the first two days, which were most notable for long speeches and extreme heat. But on Wednesday, demonstrations for McAdoo broke out, with his lyrical supporters chanting, "We don’t care what easterners do; the South and West are for McAdoo."

The following day, Franklin Delano Roosevelt gave a rousing speech in favor of Smith, but his final words were cut short by ear-shattering sirens. It was later revealed that a pro-Smith group in the galleries had set off fire engine sirens and ambulance bells, creating a metallic din that blew nearby audience members straight out of their seats. The piercing sirens overtook the arena for 40 minutes, as delegates and attendees wandered around confused and shell-shocked.

The radio announcer, his voice barely audible over the cacophony, told listeners that he feared the Garden’s trembling walls would cause the skylights to come crashing down.

Roll call nominations followed. By the sixth day, the convention had 16 presidential nominations before it. Meanwhile, in back rooms, the platform committee had reached an impasse. Wording on the Prohibition plank divided much of the committee, but the main sticking point was whether or not the platform should explicitly condemn the Ku Klux Klan.

The committee ultimately settled on a compromise: The platform would denounce secret societies but not specifically naming the Klan. When the plank was introduced to the full convention, delegates reacted with fury. Anti-Klan demonstrators took over the floor and began brawling with pro-Klan delegates over possession of their state flags. Thousands of police stormed the aisles and galleries, pulling delegates off each other as spectators spit and hissed at the crowd below. It took two hours to get the situation under control, at which point the compromise resolution passed by a single vote.

The next day, a front page article in the the NY Times noted that many convention leaders felt that "the handling of the Klan issue in this convention is one of the worst bungles in the history of the party." Another NYT writer opined that "the thrusting of this sword into the very vitals of the Democratic Party was a startling end to the bright hopes with which its leaders came to the convention."

Needless to say, spirits were not high on Monday—yes, the second Monday—when delegates finally got down to the business of voting. McAdoo led the first ballot with 431 votes, followed by Smith with 241 and 13 others who each received fewer than 60 votes. Support for the two frontrunners mirrored the vote on the Klan resolution almost exactly. Smith did not secure a single vote from the South.

Opening of the 1924 Democratic National Convention.

With no candidate close to the 732 votes needed to win, the delegates voted again. And again. And again. By the following evening, 30 roll-call ballots had been cast, yet the convention was no closer to selecting a winner. At one point Missouri switched all 36 of its votes to the West Virginian dark horse candidate John W. Davis, a former congressman, ambassador, and solicitor general, before quickly switching back to McAdoo.

A war of attrition had developed between the McAdoo and Smith camps, with each side too stubborn to consider negotiating. Faced with no good options, the delegates kept voting. Some packed up and went home. Delegates on both side were furious, convinced that the party was irreconcilably humiliating itself on a national stage.

On July 4th, while the convention was voting on the 66th ballot, an estimated 20,000 Klansmen descended upon Long Branch, New Jersey, to demonstrate against Smith. The crowd erected an effigy of Smith, his arm cradling a whiskey bottle, and charged a nickel for the chance to pelt the governor’s likeness with baseballs. Several Klan weddings and Klan baptisms took place as well.

Back across the Hudson, following yet another inconclusive ballot, one Oklahoma delegate raised the novel idea of reconvening the convention in Kansas City. According to the NYT, the delegate felt, “The whole trouble was that the convention was being held in New York, a wicked city." The proposal was quickly derailed when delegates began bickering over their preferred alternate cities.

Day after day this went on, each vote breaking the previous day’s ballot record. Finally, on July 9th—the 16th day of the convention—both McAdoo and Smith reluctantly agreed to release their delegates. Party leader and former Ohio Governor James Cox threw his support behind compromise candidate Davis, who earned the nomination on the 103rd ballot with minimum fanfare from the weary delegates. The galleries of the Garden, once brimming with energy, had long since emptied.

Davis, who would go on to lose the general election in a landslide to the Republican Calvin Coolidge, was also absent from the convention during the announcement. When reporters did eventually find him, smoking alone in a reception room on 68th Street, all he could say was, "Well, I’m glad it’s over."

#democratic national convention
#dnc
#flashback
#history
#ku klux klan
#prohibition
#original
Do you know the scoop? Comment below or Send us a Tip