Fixing NYC's Unfair Property Tax System: How Hard Could It Be?

The one salient feature of New York City's convoluted property tax system is that everyone hates it. "The property tax is too goddamn high!" Brooklyn Councilmember Chaim Deutsch boomed in front of an appreciative crowd at Brooklyn Borough Hall on Tuesday night. Given that the room was full of property owners waiting to testify in front of the City's Advisory Commission on Property Tax Reform, Deutsch might as well have screamed, "Kittens are cuddly and their tongues are scratchy and cute!"

How messed up is the property tax system? Rental properties have an effective tax rate that is five times greater than single family homes—and guess who landlords get to foot the bill? Glass-bound condos and co-ops built for Russian plutocrats and rich tech bros are appraised as if they are rentals in tenement buildings. Thanks to caps that keep property assessments low when rapid gentrification jacks values up over a short period of time, homeowners in The Bronx and Staten Island get hosed compared to their counterparts in Queens and Brooklyn.

Don't take our word for it; here's Timothy Sheares, a deputy commissioner for the Department of Finance, speaking to Gothamist in July: "There is no basis for equity in real estate taxes in the City of New York.”

So earlier this year, Mayor Bill de Blasio and City Council Speaker Corey Johnson created the advisory commission to come up with value-neutral tweaks the city itself can make to the system and suggestions for the state legislature, which alone has the power to make any significant changes. (A pending lawsuit against the City filed by a collection of real estate and civil rights groups called Tax Equity Now likely lit a fire under the Mayor's Office.)

The commission, co-chaired by former HPD Commissioner Vicki Been and CUNY COO Marc Shaw, has to deal with the same problem that has vexed policymakers for decades, which is that the system is unfair for a reason: single family homeowners feel the sting of property taxes more than other classes because they receive their tax bills in the mail every year, they have no tenants to shift the burden to, and many have a mortgage to pay. And they vote.

As a result, Class 1 properties (which are small single family homes) represent 65% of all parcels in New York City, and 47% of market values, far more than the other three classes, but their average effective tax rate is the lowest—0.76% compared to 3.63% for larger apartment buildings and 3.87% for commercial properties.

Commission member James Parrott, who is the director of economic and fiscal policies at the Center for New York City Affairs at The New School, asked a question that would be repeated throughout the night: "How do we convince people that it’s important to raise taxes on some in order to lower taxes on others?"

Very, very, slowly, according to Mark Willis, a senior policy fellow at the NYU Furman Center for Real Estate and Urban Policy. The caps on single family homes should be lifted, but over the course of 10 to 20 years.

"By making changes slowly over time, owners that experience increases in their relative tax burdens will be better able to accommodate any relative decline in the value of their property, and any downward pressure on the nominal property values will likely be mitigated by normal inflation and increases in underlying demand," Willis testified, "assuming the city continues to prosper." A "circuit breaker" to prevent homeowners from paying over a certain percentage of their income in property taxes could help ease the burden for low-income New Yorkers.

What about levying extra taxes on vacant luxury apartments, like the ones that act as safe-deposit boxes for foreign money? "All you’re gonna do is have someone occupy it for free, and it’ll add a lot of complexity," Willis responded.

Brooklyn Councilmember Stephen Levin stepped forward to argue that the assessment process should be more predictable, fair, and transparent. Been asked what specifically he felt was wrong with it. "Honestly, after several years of trying to figure this out, in meetings with the Department of Finance, I certainly don't feel like I understand it well enough to point out where the problem is."

Still, Levin criticized the way the Department of Finance made the comparisons that inform assessments, and suggested that the City use census data to better account for density and income factors.

"Because of the way that New York City neighborhoods develop, you could have wildly different economic realities three blocks apart," Levin said, noting that South Williamsburg is very different from North Williamsburg, which is "truly beyond gentrification at this point, it's a luxury market."

"We also adjust for these things," responded Jacques Jiha, the Commissioner of the Department of Finance, who was sitting a few feet in front of Levin and sounded a little miffed.

"But without clarity of what's going into the adjustments, we don't know if it's appropriate or not," Levin replied. 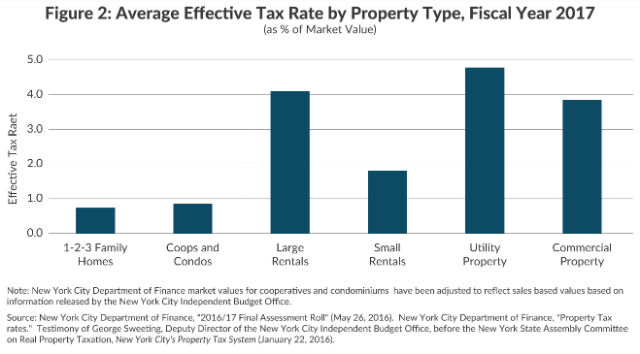 (Courtesy of the Citizens Budget Commission)

Bowen pointed out that Columbia University and New York University own hundreds of buildings in Manhattan, yet they pay almost next to nothing in property taxes thanks to a "charity" exemption baked into the state constitution. Bowen said that the schools' tax liabilities could generate $463 million every year, money that CUNY's system desperately needs. 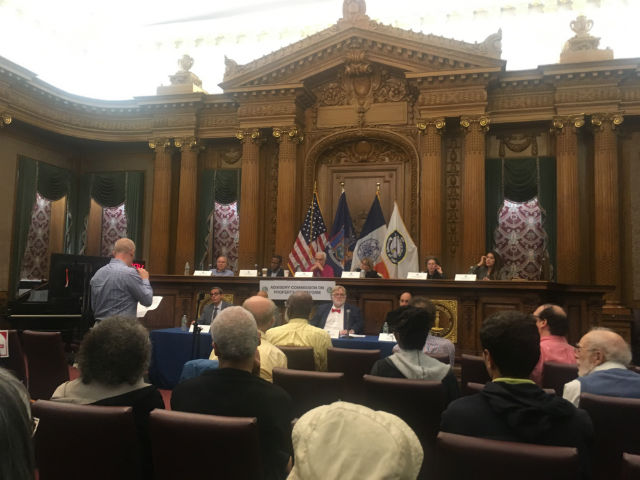 As the three-and-a-half hour hearing dragged on, sweeping critiques of the system gave way to urgent personal concerns. Each speaker had three minutes.

Monique Cumberbatch, treasurer of the Kingsview Homes in Fort Greene, spoke about how her building's taxes have increased to nearly a million dollars a year as the neighborhood has gentrified. Higher taxes means higher maintenance for tenants.

"Some of which like my mother and others were raised in neighboring NYCHA housing, and achieved the dream of homeownership as adults at Kingsview," Cumberbatch said. "These Kingsview residents are now seniors who deserve to enjoy their retirement without the threat of being unable to pay maintenance in homes they have owned for decades."

Faye Patton of Brighton Beach urged the commission to "open the New York Times' real estate section. This Sunday, $2 million brownstone; they list the taxes, just a little over $4,000," Patton said, noting that she pays $22,000 a year.

Hersh Posner, who lives in a one-bedroom in Borough Park with his wife and three children, said it wasn't fair that single-family homeowners paid less taxes overall than those who owned apartments but required just as much space.

"It’s very hard for large families to afford property in Brooklyn. In the Hasidic community, we have very fast growing, large families," Posner said. "Many families are struggling to pay the mortgage, and they still have a second mortgage, which is the taxes to New York City."

Aaron Ross, who said he lives in Sheepshead Bay with his grandmother, had a unique suggestion for the commission.

"I just wanted to make a point: you have countries where there are no property taxes," Ross said, as a few groans filled the room. "I think it’s very wrong to be paying for something that’s already yours, whether it’s a house or a toothbrush...I think property taxes should be abolished altogether."

The crowd mustered some applause. Ross mused that the City could make up for a 31% loss in revenue by increasing income taxes. "Thank you, Mr. Ross," Been said.

The Commission's next public hearing is at 6:30 p.m. on Tuesday, October 23rd at the Borough of Manhattan Community College, Tribeca Performing Arts Center, Theatre Two. You can watch the testimony after it happens here.

And read Gothamist's investigation of how taxpayers are subsidizing Gramercy Park.

Because the man has range, here are your early links: Canal Street fake purse seizure, Rep. Hakeem Jeffries is a friend to Israel, texting yourself stuff is a good practice if you're forgetful, and more.

The ruling, which could have national implications, is the latest development in long-simmering tensions between the e-commerce giant and workers on Staten Island.

The ruling, which could have national implications, is the latest development in long-simmering tensions between the e-commerce giant and workers on Staten Island.

By
Gwynne Hogan
Manhattan DA says he won't prosecute a woman arrested in the death of her abusive husband
By
Alec Hamilton
and
Michael Hill
NYC runs 3 long COVID care centers, but many New Yorkers remain unaware
By
Betsy Ladyzhets
'I brought in contraband': Ex-Rikers guard describes how he smuggled drugs into troubled NYC jail
By
Jake Offenhartz
Get the news New Yorkers need in your inbox