Remember when a small group of wealthy, politically connected Park Slope residents were angry about the city installing a two-way bike path along Prospect Park West? True, the lane foes once mobilized several dozen supporters for a protest, and their message—that cyclists were coming to body-check elderly women, slow down speeding cars, and wreck the historic character of three lanes of car traffic—was vastly amplified through a flurry of phone calls and emails to politician and reporter pals. But since a judge threw out their lawsuit against the city over the road reconfiguration, the ranks of the anti-lane contingent's hardcore have thinned.

One organizer and plaintiff, Lois Carswell of Seniors for Safety, has died since the last court date in 2014. Another, onetime Department of Transportation Commissioner and still wife of Sen. Charles Schumer Iris Weinshall, has reportedly backed away from her anti-bike lane stance as she's taken on new jobs as the chief operating officer of New York Public Library and, awkwardly, the chairwoman of the Prospect Park Alliance. That leaves two former deputy mayors and the resident of a penthouse condo on Grand Army Plaza, as far as we can tell.

But even they didn't show up to court on Thursday. The hearing in Brooklyn Supreme Court was the first in the case in two years, and the only people representing the opponents of separated space for non-motorized travel were members of a five-person team from the law firm Gibson Dunn. The firm represented George W. Bush in Bush v. Gore, and its lawyers recently billed $502 to $1,174 an hour for work on a voting rights case. Gibson Dunn is reportedly offering its services pro bono meaning the firm is likely planning to write off its many evidence binders come tax time, lest readers think that the only way the public is getting screwed here is the city's legal bill. 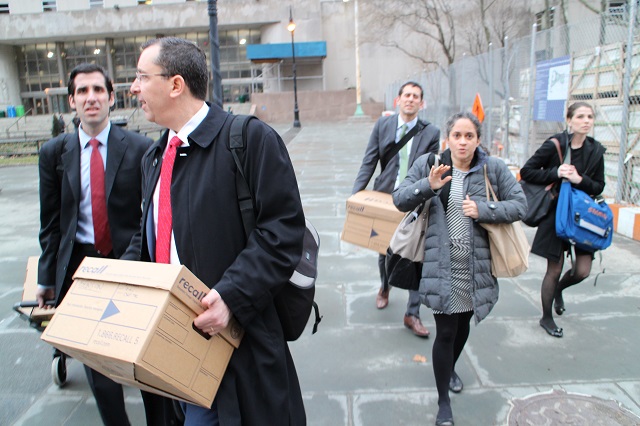 Forced to take the day off to be grilled was former transportation Commissioner Janette Sadik-Khan, now an international consultant at Bloomberg Associates, and former Transportation Department bike and pedestrian honcho Josh Benson, who's now Transportation Bureau Chief for the city of Stamford, Connecticut.

"It's amazing that here we are six years later," Sadikh-Khan said in the hall during a break. "It's our most successful project ever, it's beloved by the community, and one [group of] grumpy [neighbors] can waste hundreds of thousands of dollars of city resources fighting it."

At issue before Judge Bert Bunyan was whether or not there was evidence to show that the DOT had ever described the street overhaul as a "trial" or "pilot" project. The anti-lane activists originally filed suit in March 2011, 9 months after the city installed the bike path, and 22 months after Park Slope's Community Board 6 approved the project. Bunyan threw out the case later in 2011, saying that the statute of limitations had run out, and besides, their argument about the Landmarks Commission needing to approve the lane made no sense because the street's not landmarked.

In 2012, an appeals judge ruled that Bunyan had to hold an evidentiary hearing on the pilot project issue, because a trial would set back the legal clock. Four years and some costly legal maneuvering later, Gibson Dunn lawyers forced Sadik-Khan and Benson to relive such visceral moments of the controversy as when an aide to Councilman Brad Lander referred to the lane as a trial during a two-hour meeting of CB6's Transportation Committee and Benson corrected him, saying the path is not a trial.

Lawyer Brian Ascher questioned this recollection. If Benson said it wasn't a trial, why was that not memorialized in the two-page meeting minutes? And if the councilman was mistaken, why did he not make more of an effort to correct the misperception in writing to the board?

In the process, Benson explained that the DOT clearly announces when it's doing a pilot project, as it did with the pedestrian-friendly reconfiguration of Broadway in Midtown, whereas no traffic pattern was altered on Prospect Park West and only the normal post-installation evaluation was ever mentioned. 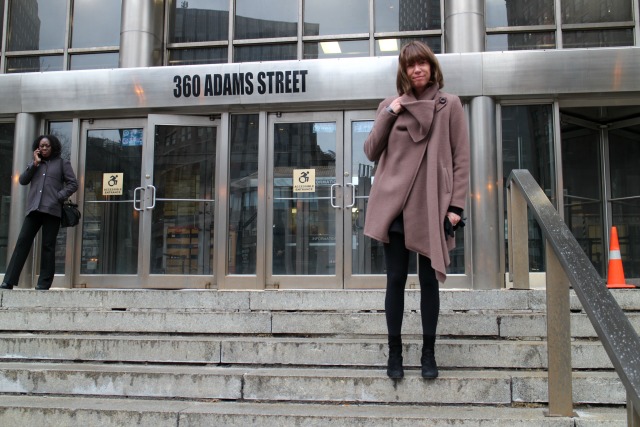 After lunch, it was Sadik-Khan's turn on the stand, but a key foil was missing. Former Brooklyn Borough President Marty Markowitz previously swore in an affidavit that Sadik-Khan told him at a March 2010 meeting that the lane was a trial, subject to modification or removal if it proved problematic. Sadik-Khan vehemently denied saying this, and in his ruling tossing the suit, Judge Bunyan cast doubt on the then-Beep's statement, writing it "is devoid of detail and fails to raise a genuine issue of material fact."

Lawyer for the city Mark Muschenheim said at the bench that as late as last week he expected Markowitz to be in court to testify, but for reasons unexplained, Markowitz was a no-show. Reached on his cellphone, Markowitz's wife Jaime said, "It sounds like you need to speak to a lawyer." When I queried her further, a man's voice in the background said, "Just hang up. Bye bye," and the line went dead.

Facing off with the former transportation commissioner was Jason Halperin, who for the last decade worked as a federal prosecutor, putting away the Newburgh Four and a corrupt Yonkers city councilwoman, among others. Here, Halperin forced Sadik-Khan to review, sometimesline by line, such damning material as a column by the New York Post's Steve Cuozzo headlined "Strangled by Bikes," and an email officials from lane opponent and former deputy mayor Norman Steisler that "includes the word 'trial' no less than 10 times, does it not?"

"That's his characterization of it, yes," Sadik-Khan said, raising her voice one of several times during nearly three hours of intense questioning. "You can say it 20 times, 30 times, 40 times. That doesn't make it accurate." 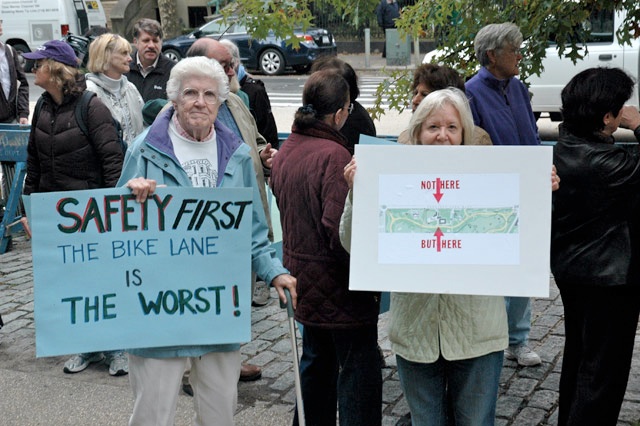 Many of these documents didn't make it into evidence because they were simply articles containing reporters' un-sourced understanding of the bike path, or emails Sadik-Khan had received along with other people, not things she'd written. What emerged from descriptions of some documents, accepted as evidence and not, was a DOT under siege and battening down the hatches.

It's true that once bike path opponents started bandying about the term "trial" along with their intention to sue, DOT waged no PR counter-offensive declaring the permanent lane permanent. On the contrary, the press office seems to have, for a period of time in late 2010 into 2011, at least sometimes avoided the question and failed to correct reporters in the newly muddied waters. If this was a strategy to wait out the statute of limitations, it appears not to have been airtight.

In any case, Sadik-Khan denies it was a strategy at all.

"You were happy to let people believe it was a trial because that would make the opposition less fierce, is that right?" Halperin asked.

"Absolutely not," she said.

Benson's testimony continues today, and the city is trying to pin down Councilman Lander to testify as well.

Disclosure: The author uses the Prospect Park West bike path most weekdays. He also attended the North American International Auto Show religiously growing up. He does not own real estate in Park Slope.