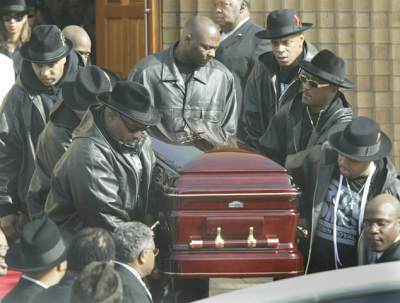 Next week, Halloween eve to be exact, will mark the five year anniversary of Jam Master Jay's death. The murderer still walks the streets, as witnesses don't want to step forward in naming the man who ended the life of the rap legend.

amNewYork and the Daily News are both looking back at the open case, stating the little that is known:

On the night before Halloween 2002, the 37-year-old Mizell was in his recording studio in his neighborhood of Hollis, Queens. Two armed men were buzzed inside; according to some reports, Jay hugged one of the pair. And then he took a single .40-caliber bullet to the back of his head.

a suspect was named, Ronald "Tinard" Washington, "a career criminal and local zero" that was living on Jay's couch and also linked to the 1995 shooting of Randy Walker (an associate of Tupac Shakur's). Next month Washington faces sentencing for a series of crimes committed after Jay's death, though he has yet to be charged with the murder of his self-described "childhood friend."

Today Jay lays at rest at Ferncliff Cemetery in Hartsdale, New York -- but his family is still looking for closure. Run DMC's old publicist says the witnesses and those who may know something "keep their mouths shut because they know they could be the next one to end up dead." This no snitching thing is getting out of hand, and Jay's cousin calls it "nonsense." Even with a $60,000 reward out there -- no one's talking.