Erickson Jinaut had city housing vouchers and a full-time job as a security guard and it still took him two years to get out of the city's homeless shelter system. Jinaut, an until recently single father of two, says that throughout his search for a new place, for which $1,515 of the rent would be covered by a city Living in Communities voucher, landlords and brokers turned him away. It was only by chance—at the residential building where he works someone overhead him talking about his apartment hunt and referred him to a sympathetic landlord—that he found a building owner in Hunts Point willing to accept his voucher for a two-bedroom.

"He liked the way I carried myself," Jinaut recalled of the stranger. "When they found out I'm a single father...they really wanted to help me," so much so that they shaved $300 off of the $1,818 rent.

Jinaut is still stressing—his walk to his girls' daycare takes him past the scene of a recent murder, and he said his caseworker is threatening to cut his voucher if he doesn't reduce his hours at work—but he feels fortunate to have found a place of his own.

The kind of landlord discrimination Jinaut describes is far from unusual. In dozens of interviews with shelter residents in Brooklyn over the last year and a half, most reported having vouchers and being unable to find a place because the people showing apartments consistently refused to take their vouchers, often over the course of months of looking. What's called source-of-income discrimination persists, along with the city's spiking homeless population, even though it's technically banned by a 2008 law sponsored by then-Councilman Bill de Blasio. Over most of the eight years since, enforcement has been lackadaisical, something the Human Rights Commission is now aiming to correct.

The commission announced on Tuesday that it is bringing administrative complaints against landlords, property management companies, and one broker, for allegedly systematically refusing to rent to voucher holders of various types. Separately, the Legal Aid Society and the Fair Housing Justice Center are suing on behalf of six women who applied to live in Starrett City in East New York and say they were denied because they relied on vouchers. The complex's management companies are in the process of appealing the case of two women, in which a judge ruled the application of one must be expedited, and four more sued early this month. Violations of the anti-discrimination law can carry fines of as much as $250,000, though they're typically much lower.

Those accused by the city in the most recently publicized complaints include a management company overseeing rental apartments in the 12,000-unit Bronx rental-and-condo complex Parkchester; former Met Mo Vaughn's company Omni New York, owner of the troubled River Park Towers complex along the Harlem River in the Bronx; Goldfarb Management, with offices in Manhattan, New Jersey, the Bronx, Westchester County, and the Rockaways; and Abeco Management, based in Bensonhurst.

At Parkchester, the commission alleges that several would-be renters and undercover investigators posing as prospective tenants were told they had "insufficient household income," because renting agents wouldn't count Section 8 or LINC vouchers towards their take-home pay, or said they didn't make enough outside of their vouchers. Messages left with two Parkchester administrative offices were not returned.

At Goldfarb Management, which the commission says controls 6,000 apartments, investigators allege that Goldfarb representatives refused to rent to three would-be-tenants as well as testers with Section 8 vouchers, also citing income requirements. A man who answered the phone at Goldfarb said, "My understanding of our policy is that we accept all programs and people with vouchers," and said he would refer this reporter's inquiry to someone with more information. We had not heard back at press time.

A woman who answered the phone at ABECO Management and declined to give her name flatly denied the allegation that workers there told testers on four occasions that they don't accept Section 8, saying, "We do that [accept Section 8], so that's a lie." 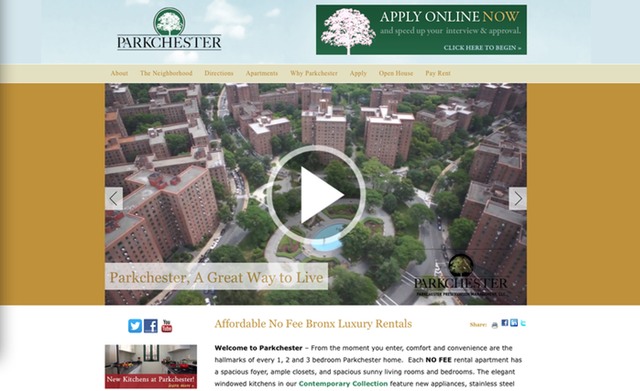 Parkchester, a planned community in the Bronx, banned nonwhite people from getting leases until 1968. Now the city is accusing management there of discriminating against poor people with housing vouchers. (parkchesternyc.com)

Juda Engelmayer, a spokesman for mixed-income developer and management company Omni New York, also strenuously denied allegations that it has a policy of not renting to LINC holders, contrary to the reports of testers and two complainants. Engelmayer said that the company has 40 LINC tenants at the 1,600-unit River Park Towers, the focus of the complaints, and "probably double that" in its properties around the city. A Human Resources Administration spokeswoman confirmed that 39 city voucher holders rent at River Park Towers, 36 of them LINC recipients.

"Omni probably has more LINC voucher tenants than any other single landlord in the city," Engelmayer wrote in an email—we couldn't verify this. "Omni helped get this program off the ground, by accepting a large number of these vouchers when other landlords would not."

"We absolutely never turn people away, and the only thing I can chalk it up to is some receptionist that didn't know what they were talking about," he said during a brief phone interview. "I can't vouch for who was there at the time that that happened, but there are LINC vouchers there. We always take LINC vouchers, always have."

Engelmayer added that "corrections will be made" if the company discovers wrongdoing, and that the course of action will depend on whether the person responsible is a manager or low-level staffer.

Perhaps the strangest target of the city's civil rights wrath, given that the commission's announcement said it's going after "large landlords and brokerage firms," is Wilkin Martinez, the proprietor, and according to him, sole employee of Martini Properties. Martinez got the commission's complaint, alleging that he told testers three times that he does not accept Section 8, in the mail three months ago. He said they're going after the wrong guy.

"They think that I’m a management company, but I don’t have any buildings," Martinez said. In his response, "I told them that I’m not taking a decision. I don’t own any buildings—I’m representing those listings. We don’t make decisions. When we take people with programs to the management company, they make the decision. They say, 'Okay this is a voucher I’m going to take I’m not going to take.' Sometimes I tell [landlords that voucher tenants are] qualified, they working, they have good credit, and they say, 'No.'"

In fact, Martinez said, the bulk of his clients were voucher holders, whom he typically ended up steering to more receptive landlords renting out apartments in private homes. Often, he said, even if big management companies take vouchers, they have internal departments that specifically handle voucher listings, giving only "open listings" for "working people" to brokers to shop around.

"I don’t even know who call me, what was the conversation that we had," he said regarding the complaint. He is clear on one thing, though: he's a small fry.

"I don’t even do real estate—right now I’m a cab driver," he said, calling the complaint "unfair," and saying that the city is "misunderstanding." "They gotta go after all the management company, thinking that we are real estate agents make the decisions. I don’t even have property in New York City. I am just renting a property to survive." 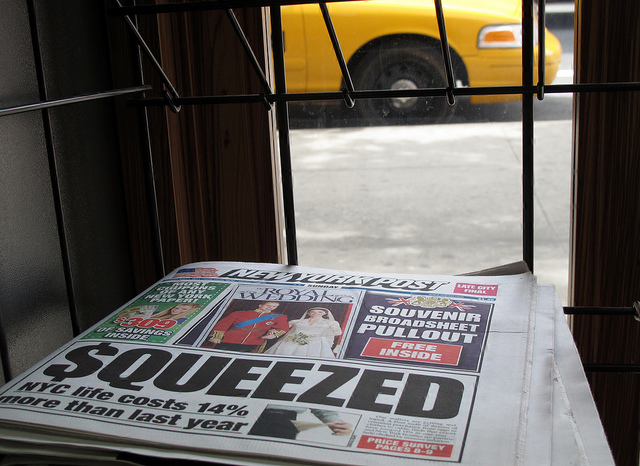 Perhaps driving the point home is Martini Properties' website, which was down by March 2016, and in October 2016 seemed to have been taken over by someone going by TURKISHSPYHACKER who demanded the extradition of dissident Turkish cleric Fethullah Gülen, and declared, "FUCK UNITED STATES" and a laundry list of other countries, "YOU WILL KNOW POWER OF TURKISH AND ISLAM." The hacked version of the site is gone, but the real estate version has not returned.

Asked why Martinez is an enforcement priority, Human Rights Commission spokesman Seth Hoy said, "The NYC Commission on Human Rights is going deep and wide with our source of income enforcement efforts and is currently investigating more than 200 cases of source of income discrimination involving landlords and brokers of all sizes. Our investigation shows that Martini Proprieties engaged in 'pattern or practice' discrimination for repeatedly refusing to take Section 8 vouchers."

In a press release, the commission touted that it filed more than 120 complaints alleging source-of-income discrimination in 2016, up from 22 in 2014.

The Real Estate Board of New York did not return a call seeking comment, but Martinez and Jinaut offered some of their insights into why landlords don't like vouchers. Martinez said that among those who take the government payments, Section 8 and LINC are the most popular because they are considered the most reliable. Jinaut said that in his experience, voucher-friendly landlords are most interested in Section 8, a longstanding federal program that the Department of Housing and Urban Development in recent decades has used to transition away from managing brick-and-mortar public housing developments.

LINC and its city-level counterparts, on the other hand, are recent creations of the de Blasio administration. These are meant to fill the gap left by the state Advantage program, which then-Mayor Michael Bloomberg and Governor Andrew Cuomo ended in 2011. The abrupt demise of Advantage left tenants and their landlords in the lurch, and some in real estate remain distrustful of similar schemes.

According to Jinaut, that distrust is warranted to a degree. Jinaut says that he moved into his apartment in August, but that city computers still list him as living in a shelter, meaning the city thinks it's spending $3,000 a month on his "shelter allowance," leaving nothing to go towards his rent voucher. In other words, his landlord has yet to get paid, and it's only thanks to his kindness that Jinaut is not back at the shelter intake center in the Bronx.

There are, of course, other reasons landlords might reject vouchers, including racism and classism.

What seems to be a major effect of widespread voucher discrimination is scarcity. Federal housing officials typically view vouchers as a way to achieve some level of economic integration, moving poor people out of poor neighborhoods and away from the ill outcomes associated with living in them. However, data shows that voucher holders tend to rent in areas of concentrated poverty at even higher rates than poor people in general. In Jinaut's experience, "Everybody [from the shelters] looks at the same apartment. You go there and it’s 40 families. There have been times where a fistfight almost broke out right there. The landlord definitely doesn’t want to deal with that, and then it’s guilty by association."

Still, vouchers are a better deal for the city than shelters, and typically speaking, apartment living beats staying in a shelter. It cost the city around $36,000 a year to house Jinaut's family in a homeless shelter in Brooklyn crawling with rodents and roaches, whereas $18,000 a year in voucher assistance gets Jinaut and his girls an actual apartment, assuming the voucher kicks in at some point.

The commission's complaints will be decided in administrative trials. Hoy declined to provide the actual complaints, citing the privacy of the complainants, and saying that the investigations are continuing. Martinez said he cannot afford an office, much less a lawyer.