Chance during his rescue (Photo by Anne-Katrin Titze)

For years Anne-Katrin Titze and Ed Bahlman have monitored Prospect Park Lake and its waterfowl, which often meet tragic ends thanks to the city's human population (and the US Dept of Agriculture). In the latest incident, Titze tells us a Double-crested Cormorant they named Chance was successfully rescued after some barbed hook used for fishing went through its leg. She tells us a successful capture and rescue of a bird like this is "extremely rare."

Barbed hooks are not allowed in city parks, and signs have been posted in the park listing the rules for fishing... but the fishermen have long gone unregulated. On top of using illegal equipment, they often illegally dispose of their fishing line and hooks, which birds can later get trapped in. 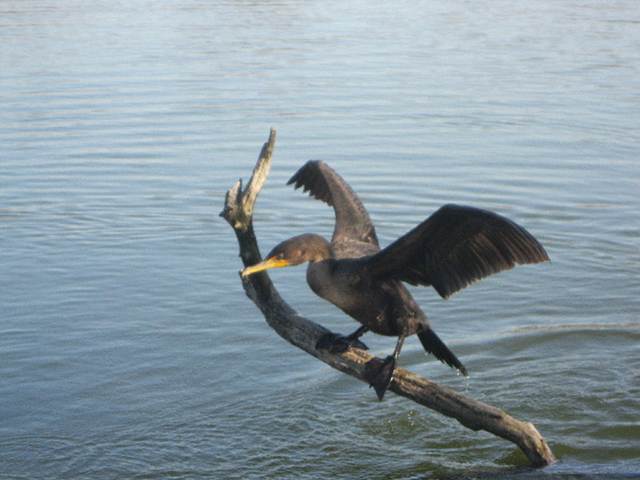 The Prospect Park Alliance's president, Emily Lloyd, told the NY Times, “We don’t want wildlife to get hurt; we feel very strongly about that. We may not get perfect compliance, but over a year or two, I think you can accomplish a lot in changing people’s behavior.” The incidents haven't slowed down in years, however, which has led to criticism of the park. Earlier this year when a swan was hooked, we noted that the park is not known for fining fishermen who don't follow park rules. And plenty of deaths have happened since then—in fact, Titze tells us, "all the other birds pictured in the NY Times from other locations died from fishing abuses."

Vickie Karp of the NYC Parks Department says that no summonses have been given to fishermen this year.