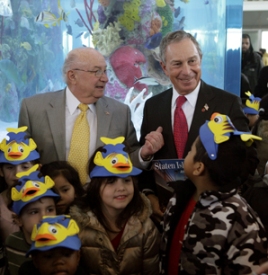 Staten Island Borough President James Molinaro, and some young constituents, unveiled two new 10-ton fish tanks at the St. George ferry terminal. Molinaro said the tanks will liven up people's commutes; in July, he told the Advance, "It's very soothing because we live on an Island and it's very pleasant, so it fits perfectly."

Project cost $750,000 and features hundreds of individually picked fish from the Caribbean. Some argue that the tanks will be vandalized (scratches apparently can be buffed out), that they take up space, and that three-quarters of a million dollars for fish is a folly. But Molinaro said, "Some people don't understand the system. This is capital money, I can't hire a school teacher, I can't hire a cop, I can't put a new bus on the street with this money."

Mayor Bloomberg, who attended the unveiling, believes in the calming power of fish (he's installed them at Bloomberg LLP offices as well as his City Hall bullpen) and supported the Beep's decision, saying it could help with tourism. It seems to be helping with the natives, too. A 23-year veteran, Ferry Terminal supervisor John White, said, "I remember this place when it was a dungeon. I think it's beautiful and it definitely attracts the people." And some residents said they would be coming back.

The tanks were designed by Acrylic Tank Manufacturing, which has designed tanks for Las Vegas resorts and celebrities like Steven Spielberg and Kobe Bryant. The fish will be maintained by the Staten Island Zoo.