First State of the MTA Address: MTA at a "Crossroads" 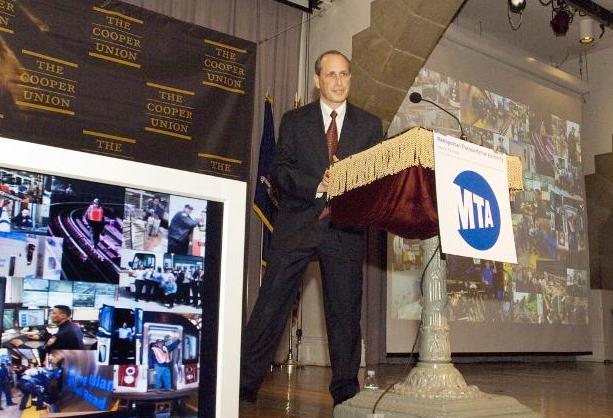 Photograph of MTA CEO and Executive Director Lee Sander during the inaugural State of the MTA Address, courtesy of the MTA

This morning, the first-ever State of the MTA Address was given, with MTA CEO and Executive Director Elliot Sander Sander emphasizing the MTA was born 40 years ago out of crisis and needed federal, state, and municipal cooperation to get things done (in other words, nothing changes!).

Sander said he's committed to creating a new environment and structure that will bring out the best in its employees (no transit strike on his watch?) and laid out a vision for the MTA in the next 25-40 years as well. Per CityRoom:

“Today, we stand at a crossroads,” Mr. Sander said. “We can take a business-as-usual approach to how we run the M.T.A. completing the projects that are currently under way and continuing the State of Good Repair program. Or we can set our sights higher. We can complete the projects underway, continue the State of Good Repair program and press on to give the region the network of mobility it needs to be competitive with its global peers. That is the road, or should I say track, we must take. As the M.T.A. goes, so goes the region.”

The major themes of the address were the need for continued funding from federal, state, and municipal governments, increased use of underutilized but existing assets, continuation of major capital programs (like East Side Access and the 2nd Ave. Subway), longer-term efforts to implement new technologies (email alerts for service disruptions), and more regional level cooperation between transit agencies.

He also added there would be $30 million more in new service, which means more subway services on lines, more bus routes, and additional commuter trains for LIRR and Metro-North. One interesting point: The MTA is looking to replace Metrocards with technology that will serve as a contactless, pass-over device that will function nationwide.

The full address can be viewed at the MTA's site here; we've included the MTA's press release on the plan's highlights after the jump:

Highlights of the speech include:

MTA to Implement Service Enhancements for 2008
Sander said that 2008 revenues to date are in line with budget projections, and he will recommend to the MTA Board moving ahead with the service enhancements included in the financial plan.

That means $30 million in new service this year. MTA customers will benefit from increased service on 11 subway lines, extended and new bus routes, additional commuter rail trains and cars on LIRR and Metro-North, and improved customer communications. More information on specific initiatives is available from each operating agency.

MTA to Host Quarterly Webinars
After receiving enormous interest in its December webinar, or online forum, on its budget, the MTA committed to holding quarterly public webinars. The first session will be held later this month and will address the MTA’s recently released 2008-2013 capital program. MTA leadership will provide a presentation on the plan and then take questions submitted on the MTA’s website. Further details will be released shortly.

MTA to Streamline Bus Operations
This year MTA will be taking significant steps to fully integrate the operations of New York City Transit, MTA Bus and LI Bus to create a consolidated regional bus operation. This will enable the MTA to eliminate redundant functions and better leverage the institutional capabilities of all three existing bus entities.

MTA Releases 40-Year Transportation Vision
Last year, the MTA began an ongoing process of identifying a 25 to 40-year vision for the region’s transportation network. Today Sander revealed an outline of the vision for the first time. The vision provides a more streamlined regional transportation experience building on the expected completion of projects currently underway, especially Second Avenue Subway and East Side Access. $50 million is included in the 2008-2013 capital program for needed further study of many of these ideas. Highlights include:

Extension of the full-length Second Avenue Subway to West Harlem, the Bronx, Queens and Brooklyn
* Spur to West Harlem under 125th Street
* Extension to Queens via the 63rd Street tunnel to relieve crowding on the Queens Boulevard line
* Extension to Brooklyn, consistent with plans for the Lower Manhattan rail link, through Downtown Brooklyn and along the Atlantic Avenue branch of the LIRR to connect with the AirTrain in Jamaica
* Extension north into the Bronx hub/Dyre Avenue corridor

Use Underutilized Rights-of-Way and Middle Tracks to Provide New Service
* Explore the Regional Plan Association’s circumferential subway line proposal, which would convert the lightly used Bay Ridge freight line into a subway service arcing from southern Brooklyn to Queens to the Bronx.
* Use middle tracks on elevated subway lines, primarily in Brooklyn and the Bronx, to provide new express service.
* Alleviate crowding on the Queens Boulevard line by using space on Main Line right-of-way for new tracks; utilize Rockaway Beach right-of-way to extend service from Main Line corridor to southern Queens and the Rockaway Peninsula.

Implement New Service Throughout the Region

* Staten Island: Implement rapid transit options for the North Shore and the West Shore, ideal for BRT or light rail.
* Long Island: Shorter shuttle trains on the North Fork, South Fork and Oyster Bay branch to provide suburb-to-suburb service, similar to successful LIRR East End shuttle service.
* Tappan Zee project: Opportunity to bring Metro-North trains from West of the Hudson to connect with the Hudson line.
* Airport access: Explore with Port Authority a second AirTrain service to LaGuardia from the LIRR Main Line at Woodside, in addition to previously announced study on Stewart Airport.
* Bridges and Tunnels: MTA Bridges & Tunnels will commission a study later this year on the feasibility of adopting “video tolling” technology as a replacement for cash-toll collection, similar to the system in use on Route 407 around Toronto.

#Address
#As
#east side
#east side access
#Elliot Sander
#Executive Director
#Lee Sander
#metro
#MTA
#MTA CEO
#plans
#sander
#subway
#The MTA
#transit
Do you know the scoop? Comment below or Send us a Tip
A new Gothamist is coming! We’ve moved comments over to our beta site. Click here to join the conversation and get a preview of our new website.