First Place on the Line as Jets Visit Patriots 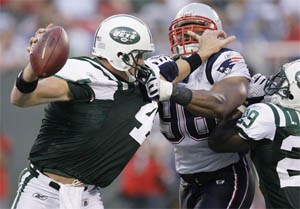 Forget for a second that the teams don't like each other and that the coaches, who once formed a famous mentor-protege relationship, now can't bring themselves to cordially shake hands at the end of games. For once, the bickering and dislike can take a backseat to football. For once, the Jets are a worry to the Patriots. The winner of Thursday night's game will have sole possession of first place in the AFC East and the inside track to the division title. If the Patriots win, they will sweep the season series from the Jets -- they also won in Week 2 -- and have a firm hold on the driver's seat.

What is this game going to come down to? The Patriots are banged up. Tom Brady's season ended in the first quarter of Week 1. Adalius Thomas, New England's elite linebacker/defensive end, broke his arm last week. Laurence Maroney and Sammy Morris, the Patriots' top two running backs, are both out. If the Jets are serious about doing anything this season, they need to win this game against an undermanned opponent.

The Jets looked downright dysfunctional in the Week 2 matchup between these two clubs. Brett Favre's bunch's most "impressive" wins have come against the Cardinals at home and the Rams at home. The Patriots don't have a full resume either, but they have consistently overachieved under Bill Belichick, and there is no reason to expect them to stop now. If the Patriots' head man can force Favre into turnovers -- or if he sits back and merely watches while Favre forces himself into said turnovers -- the Patriots will be in good shape. Brian Schottenheimer's offense may be too conservative to take advantage of a banged up Patriots defense. Expect a close game, but with the game in Massachusetts, the Patriots have the slight edge.

Tonight's 8PM game can be seen locally on Channel 11.