Uber on Tuesday announced an agreement with the Northeast district of the International Association of Mechanics (IAM)—a large union representing thousands of truck and black car drivers—to form a worker "association" for the app's 35,000 New York City drivers.

The first organization of its kind to be formally acknowledged by the startup, the newly-formed Independent Drivers Guild will meet regularly with Uber management. As members of the IDG, drivers will also have a handful of new rights and benefits, including the ability to challenge suspension from the app. But unlike a traditional union, the IDG will not have the right to collectively bargain for a contract—driver fares, benefits and protections will still be set by the company.

"Forming this Guild is crucial for thousands of drivers who need a stronger voice and gives organized labor an opportunity to shape the new economy," said IDG founder James Conigliaro, Jr. in a statement.

Under the five-year agreement reached this week, Uber drivers will meet with management on a monthly basis. Drivers will have access to discounted legal services, as well as life and supplemental disability insurance, roadside assistance, and a website consolidating driver "assistance and resources," according to Uber.

Because Uber drivers in New York City and across the country are classified as independent contractors rather than employees, the startup has no legal obligation to bargain.

A settlement reached last month between Uber and its drivers in California and Massachusetts denied employee status in those states, but awarded up to $100 million to the plaintiffs. In a statement on the settlement, Uber also agreed to fund "drivers associations" in both states, to meet quarterly with the company and discuss "issues that matter most to drivers."

Veteran black car organizer Kevin Lynch, who has recently made his own efforts to form a non-union driver organization in NYC (and says he plans to work with IDG), told us recently that he saw this as a positive step. "There is a strength when you bring thousands of people together," he said. "In the absence of employee status... Uber has agreed to negotiate."

Speaking with us anonymously on Wednesday (for fear of employer retribution), one driver countered that any association formed with Uber's blessing is "fishy."

"IAM is one of the best unions out there," he said. "But usually corporations are against unions, because they work on behalf of the workers for higher wages and better conditions. When you have Uber saying, 'Oh yeah, we came to an agreement that you guys are going to be represented...' it's not necessarily working for the people. They're looking for a mediator to pipe down the protests." 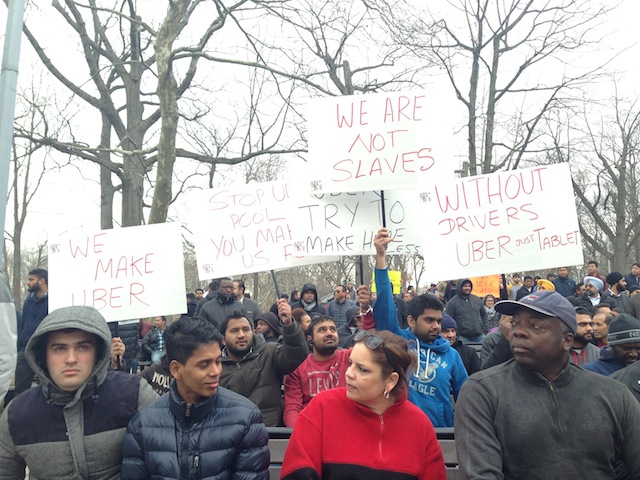 Uber drivers rallying before a strike to roll back fare cuts, in February (Emma Whitford / Gothamist).

IAM and Uber also announced plans Tuesday to lobby at the State level for equivalent taxes on taxi and black car trips. The NY Times reports that black car rides (these include Uber trips) currently have a 9% tax that doesn't apply to taxis (there's a fifty cent charge per taxi trip that goes to the MTA). Uber said on Tuesday that money saved from taxes would "likely" go into a benefit fund for drivers.

Exactly how those benefits would be meted out is unclear, but the app said funds could go towards paid time off, retirement savings accounts, or an immigration assistance fund.

Bhairavi Desai, founder of the New York Taxi Workers Alliance (TWA), said in a recent interview about driver associations that anything short of full employee status and the right to organize as a traditional union would only hurt the drivers in the long run. "Uber saying that it will recognize Uber associations is just good old company unionism, which builds no power for the workers," she said. "We're not looking to legitimize that model when we think a real union can be built."

To date, Seattle is the only city in the U.S. where Uber and Lyft drivers have been awarded bargaining rights, albeit as independent contractors rather than employees. Desai argued that the victory was partial, because these drivers still lack the basic employee protections mandated by the federal government, like the right to a minimum wage and overtime. "Employee status gives you the protections of labor laws, which are the floor that you stand on," she said. "Collective bargaining helps you raise the ceiling. When you walk in to negotiate wages without even a minimum wage, the floor is lowered."

Uber's January decision to reduce its fares by 15% citywide has been of primary concern to many full-time drivers in recent months, and prompted several day-long strikes in February, organized by TWA in conjunction with the Uber Drivers Network—one of several Uber driver organizations that the company does not formally recognize.

Drivers Network organizer Abdoul Diallo told the NY Times that he was skeptical of any agreement that didn't make fare negotiations its number one priority. "First and foremost, price cuts and commissions matter most to drivers," he said.

#independent drivers guild
#uber
Do you know the scoop? Comment below or Send us a Tip