First Look At The Tallest Residential Tower On Earth, Headed For Midtown Manhattan

The Nordstrom Tower planned for 217 West 57th Street will likely be the tallest residential tower in the world when it's completed in 2018. New renderings obtained by NY Yimby now show how dramatically the tower will dominate the midtown Manhattan skyline, which has already been radically altered by the residential tower going up at 432 Park (a building that has come to be known in some circles as the "middle finger.")

The Nordstrom Tower will be taller than 432 Park, with a roof height of 1,479 feet—putting its roof above 1 World Trade Center. (Its spire will rise to 1,775 feet above street level, making it one foot shorter than 1 World Trade Center, though NY Yimby points out that midtown's slight elevation means 217 West 57th will ultimately be 1,850 feet above sea level.) The building's bottom seven floors will host a deluxe Nordstrom department store, while the upper floors will be gently used as tax shelters for foreign oligarchs. Here's a look at one of the penthouses, which has been realistically rendered without any signs of life: 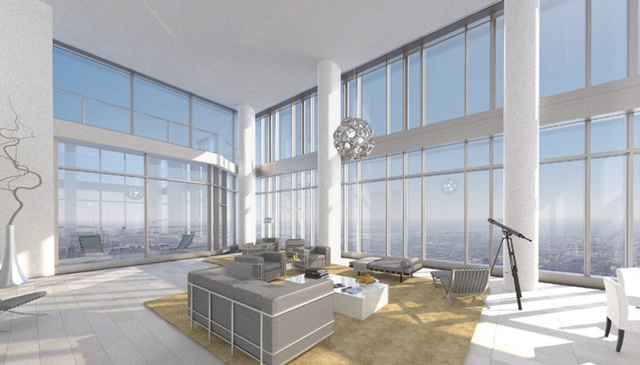 Last year, the NY Times determined that 57% percent of residential units from East 57th Street to East 59th between Park and Fifth Avenue sit empty for at least 10 months out of the year. "My district has some of the most expensive land values in the world—I’m ground zero for the issue of foreign buyers,” State Senator Liz Krueger told the paper. “I met with a developer who is building one of those billionaire buildings on 57th Street and he told me, ‘Don’t worry, you won’t need any more services, because the buyers won’t be sending their kids to school here, there won’t be traffic.’ He said it like this was a positive thing."

#midtown
#nordstrom tower
#nyc
#renderings
Do you know the scoop? Comment below or Send us a Tip