For more than a year developer Forest City Ratner has been mulling making the controversial towers at the Atlantic Yards project the tallest prefabricated construction buildings in the world, but was never quite willing to commit. Until now. The Times is reporting that Ratner has "cracked the code" of making pre-fab work for tall towers and is going to go modular all the way. And you can see the plans yourself tomorrow night, if that is your thing.

Forest City Ratner is planning on breaking ground on the first of its new towers, the 32-story "B2" tower, on December 18th. And if it goes well it will be just the beginning. Ratner wants to build 15 modular buildings on the multi-billion dollar site, some as tall as 50 stories. Currently the tallest modular building in the world is a 25-story dormitory in Britain, but modular buildings have been increasingly popping up in China with good results. Here, for instance, is a 15-story hotel going up in, oh, two days: 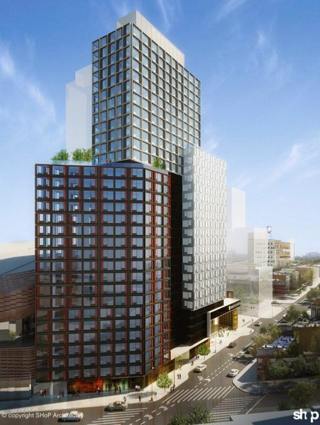 And the towers planned for the Atlantic Yards are expected to be much fancier, as Ratner hopes to have apartments suitable for low-income and luxury prices (like $3,150 a month for a 700-square-foot one bedroom!). The B2 building, for example will be made of roughly 930 modules that are "typically 14 feet wide, 35 feet long and 10 feet tall" and will be equipped with "floors, walls, electric lines, plumbing, kitchens, toilets, exterior facades and even towel racks." All before they are installed in the tower.

“This is more than innovation,” said MaryAnne Gilmartin, executive vice president of Forest City Ratner. “We’ve cracked a code that will allow us to utilize cutting-edge technology to introduce greater affordability, more sustainability and world-class architecture.”

She said modular was suitable for both subsidized and luxury housing. Forest City says it hopes that other urban builders will use the technology. The company also sees a market for building prefabricated bathroom “pods,” which slide into the modules, and can also be used by conventionally built hospitals and other institutions.

A variety of modules, which come in different shapes, together with various glass and colored exterior panels, will break up the mass of the building so that it does not look like a Lego tower.

We'll but the "not look like a Lego tower" when we see it. Sounds like it'll just look like a Lego Technics tower. Meanwhile, though Forest City Ratner says the first tower will only be "marginally less expensive" to build than a normal tower, "there should be increasing efficiency with each building at the site." Interestingly, the unions are grudgingly okay with it, having made an agreement in principle for the site. After all these years, weird to think that the housing part of this wildly divisive project is actually going to happen!

#Atlantic Yards
#barclays center
#brooklyn
#construction
#Forest City Ratner
#modular
#ratner
Do you know the scoop? Comment below or Send us a Tip