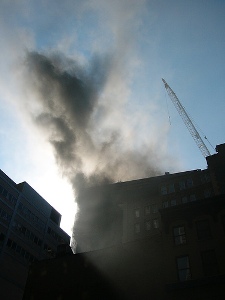 Anger and frustration about the Deutsche Bank fire that claimed two firefighters' lives simply continues to mount as the Uniformed Firefighters Association says helicopters could have prevented the tragedy. Union president Stephen Cassidy said, "I think it’s very possible that the outcome would have been entirely different."

While responding to the Deutsche Bank fire, firefighters found that the standpipe was broken, which meant water could not be delivered to the higher floors immediately (firefighters ended up improvising with a 200-foot hose made of many hoses). The UFA says that Fire Commissioner Nicholas Scoppetta declined to buy two or three choppers, even though other top FDNY commanders recommended the purchase (Homeland Security funds would have cover the $30 million cost). Cassidy said, "How else can we fight a fire in a major building in New York City if we don't have water? The Deutsche Bank tragedy highlights that we can't."

Scoppetta doesn't think that using helicopters to fight fires is safe and told WCBS 2, "You can't use the helicopter to actually fight the fire. You've got to do it in other ways. We have a 61-page protocol for fighting high-rise fires. That's what we use and it works very well, and that's what we use." The UFA also thinks that choppers can be used for visual inspection, but the FDNY says that the NYPD lets them use their choppers for that.

A firefighting helicopter would be able to carry 1,000 gallons of water whereas a regular hose carries 250 gallons/minute. Cassidy says that a fire chopper could refill in the Hudson or East Rivers.

Photograph of the fire by Marianne O'Leary on Flickr