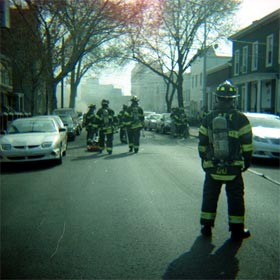 Now that the NYPD got an almost 10% retroactive pay hike, the firefighters are looking for a similar boost. The Uniformed Firefighters Association want to revisit the raises for the years 2004-2006 where their annual raises were 3.15% or less.

The UFA wants a "comparable wage increase" and UFA president Steve Cassidy said of the NYPD's pay increase, "We knew that the Patrolmen's Benevolent Association was going to fight and we wished them well. They certainly have succeeded, and we are going to... solve the problem as it applies to New York City firefighters."

However, there's still unease about the NYPD pay raise. Though rookie salaries were bumped up nearly $10,000 to almost $36,000, they had to give up half of their 20 days of vacation. John Jay College of Criminal Justice Professor Eugene O'Donnell told the Post, "When I joined the NYPD in 1982, my salary was $27,000. A quarter of a century later, it's barely gone up, and cops had to buy this raise. They have had to give up their vacation for an extra $10,000."

The Daily News has an editorial saying cops were "Lynched again"--as in PBA president Patrick Lynch doing another bad job.

Photograph of firefighters in Astoria by tobyleah on Flickr