Firefighters Take on Another Element to Rescue Kids 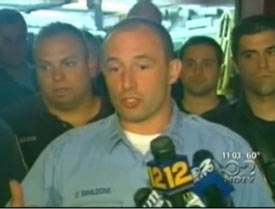 Three young people--ranging between 16 and 20 years of age--were pulled to safety by FDNY rescuers off a jetty at Coney Island. Four firemen waded and swam out to the end of the jetty, where two women and one man were trapped by a rising tide.

The incoming tide and pounding surf knocked one of the people, a young woman, off of the jetty, where she was badly bruised and cut--one FDNY official said she "had gotten knocked off the rocks numerous times." Firefighters Rob Scheer, Thomas Dolan, Carmine Pecoraro, and Michael Manza from Tower Ladder 161 headed into the surf to pull the kids to safety.

An unusually high tide and high winds did not help them out--a witness said, "I was coming back with the bike I was having a hard time pedalling it."--but all of the rescued youngsters escaped serious injury.