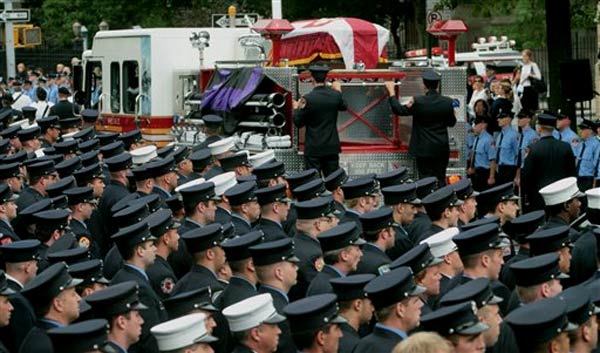 Yesterday, firefighters and the community were in Bay Ridge to remember Joseph Graffagnino, one of the firefighters who died while fighting last Saturday's 7-alarm fire at the Deutsche Bank building. The building, which was in the process of being dismantled, has been described as a deathtrap, what with the contractors using flammable materials, a broken standpipe (which couldn't deliver water to the fire), and a lack of FDNY inspection.

Graffagnino and fellow Engine 24, Ladder 5 firefighter Robert Beddia died when their oxygen supplies ran out. Thousands of firefighters from NYC and the region attended Graffagnino's funeral. His mother said, "Joey always wanted a brother. Who would have thought, 20 years down the road, he would have thousands?" Both Governor Spitzer and Mayor Bloomberg spoke at the funeral, with Spitzer vowing, "Let us begin by uncovering the truth about what happened, demand answers to the unanswered questions and then do whatever is necessary to make sure a tragedy like this never happens again." And Bloomberg said, "We owe you and every member of the FDNY answers to the difficult questions that this fire raised. We're going to get those answers and those answers will be followed by actions." Graffagnino, who died at 34, leaves behind his wife Linda, 4-year-old daughter Mia and nearly 1-year-old son Joseph.

Still, many other firefighters are angry - especially after a 300-pound jackhammer fell from the Deutsche Bank building's 23rd floor yesterday, hitting a work shed and injuring two firefighters who were investigating the site. The NY Times explains that a worker from John Galt Corp. (the subcontractor fired from the Deutsche Bank demolition job) lost control of a jackhammer. Firefighters William Corbetis and Neil Nally were essentially saved by the work shed, because the jackhammer fell at 75MPH. One firefighter told the Daily News, "We are thanking God they had their helmets on. If they didn't, that would be two more funerals to go to."

Corbetis' helmet was shattered and he underwent surgery, while Nally also suffered head injuries. Another said, "We're doing escort duty there. We're baby-sitting a construction company that's run by the Three Stooges." Bovis, the contractor who is coming under a lot of fire, says that no John Galt workers will be on site today. City Councilman Alan Gerson said to the Post, "It's incredible. The only work that's supposed to be taking place on the site is to prevent contamination and debris. You got to ask how it can be that work to prevent falling debris caused falling debris." Even more crazy, back in May, when a pipe fell from the Deutsche Bank building and fell into a neighboring firehouse, the Lower Manhattan Development Corporation said they would put protective scaffolding up...but that never happened.

The funeral for Beddia is this morning at St. Patrick's Cathedral.

Photograph of Graffagnino's funeral in Brooklyn by Bebeto Matthews/AP