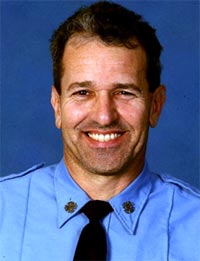 The sister of the 23-year FDNY veteran who died during the Deutsche Bank building last August is suing city agencies and contractors, citing their "wanton, willful, and reckless conduct" in his death.

The Deutsche Bank building had been undergoing a slow dismantling process, and a worker's cigarette likely started the 7-alarm fire. Robert Beddia, 53, (pictured) and Joseph Graffagnino, 34, died on the 14th floor, when they ran out of oxygen (the FDNY tapes are harrowing). It was later discovered 20-feet of standpipe had been removed, preventing the FDNY from getting water. It was also revealed the FDNY did not inspect the building as it should have and three senior fire officials were demoted.

The Lower Manhattan Development Corporation (which owns the building), the Lower Manhattan Construction Command Center, contractor Bovis Lend Lease, subcontractor John Galt and other companies were named in the lawsuit. A lawyer for Beddia's sister Barbara Crocco told the Daily News, "They owed these firefighters a safe place to work. And they gave them a place that was a mess, an absolute debris mine field."