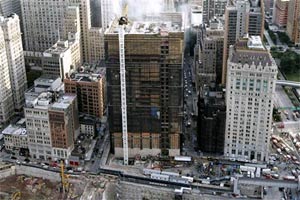 Yet another depressing fact revealed about the Deutsche Bank demolition in the wake of two firefighters' deaths. The NY Times reports that contractors had created an emergency exit plan through sealed stairwells, but the firefighters didn't know about the plan. Fire department spokesman Francis X. Gribbon told the Times, “The Fire Department was not involved in creating this plan, specifically — and most importantly — with regard to the sealed staircases. We were not notified about it. We were not consulted about it.”

The staircases were sealed with "heavy plywood and plastic to prevent toxic materials from escaping" and had "hinged trap doors." The Times has a graphic showing how close the stairwells were to the firefighters, Robert Beddia and Joseph Graffagnino, who died from lack of oxygen - Beddia's body was actually on one of the sealed staircases.

Amidst the finger-pointing in the aftermath of the tragic August fire (caused by smoking), there's a paper trail that only bureaucracy could create. John Galt, the subcontractor hired by contractor Bovis Lend Lease to demolish the contaminated building at 130 Liberty Street, created the escape plan. Bovis sent the plan to the Lower Manhattan Development Corporation, the state entity in charge of the building. The plan was actually "posted on the agency’s Web site"; the Times writes that the LMDC has not commented about whether it was ever, you know, forwarded to the Fire Department, but the LMDC declined to comment because the Manhattan DA's office is investigating the fire and deaths.

The Fire Department says they were never alerted to the plan. Of course, the FDNY was alerted to dangers at the site prior to the site according to an internal memo. And the contractors admitted to removing 20+ foot long piece of standpipe - critical for firefighters' water supply - because they thought it wasn't working.