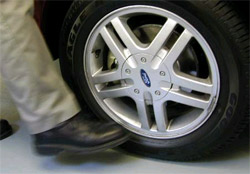 Hmm, the Bravest and Strongest might be more like the Fightiest when there's booze involved. When a man discovered two men vandalizing cars, the man decided to confront them. But it turned out the two troublemakers were a drunken firefighter and sanitation worker, who then allegedly grabbed the man's shoe and "tossed it over a fence". And then they allegedly punched the guy, hit him with a metal rod and stole his jewelry.

The incident occurred around 4AM yesterday morning, on 20th Avenue in Astoria. Newsday reports that firefighter Chad Bonaventura, of midtown's Engine 8, and Joseph Basile, a sanitation worker in Elmhurst, were charged with robbery, felony assault and criminal possession of stolen property.

According to the Post, Bonaventura was suspended without pay, while it's unclear what Basile's status is.

#crime
#robbery
Do you know the scoop? Comment below or Send us a Tip