A 23-year-old firefighter died from injuries sustained while responding to a fire at 146 Leonard Street in East Williamsburg. Daniel Pujdak, a 2-year veteran with Ladder 146, fell four floors from a bucket ladder and suffered serious head injuries; he was pronounced dead at Bellevue shortly after. Over 60 firefighters were needed to control the fire, which allegedly started because of a cigarette left on a window sill.

A neighbor told the Post, "It looked like he just hurtled and hit the ground. I couldn’t even scream. He was standing on the roof. It looked like he was overcome by smoke ... There was so much smoke on that level." The Post adds that the site "housed a four-story, formerly industrial building that had been 'illegally' converted into residential lofts," according to neighbors. One of the apartment's residents spoke to the NY Times; she confirmed that the roommate who lived in the room where the fire allegedly started was a smoker, but that she had never seen the roommate smoke in the apartment. And "She also said the roommate usually came home later than when the fire was reported." 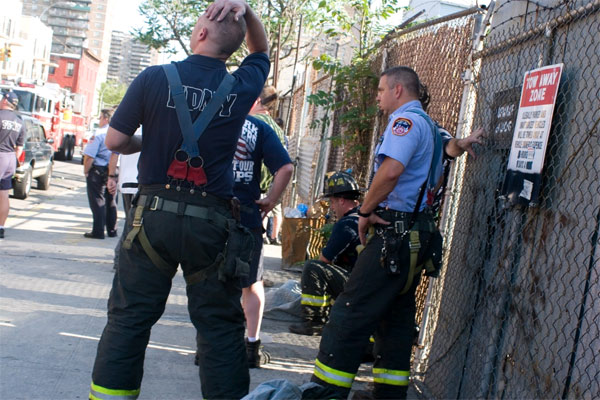 There are profiles of Pujdak from the Daily News and NY Times. Pujdak lived in Queens, was raised in Greenpoint and attended St. Francis Prep and SUNY Cortland; he had worked as a personal trainer at the YMCA in Greenpoint before joining the FDNY (the Times reports he did personal training part-time after becoming a firefighter, too). A fire chief told the News, "He talked about the work constantly. He loved being a fireman," while a lieutenant told the Times, "People see us playing with water or whatever, but what they don’t realize is that two minutes after they see us we could be crawling down a hallway or falling off a roof, which is what happened to this 23-year-old kid. At any given time we can go out on a job and not come back.” And his younger brother Matthew is planning on joining the FDNY. The FDNY has update its website with information about Pujdak: "Firefighter Pujdak is the 1,135th member of the New York City Fire Department to make the Supreme Sacrifice in the Department's 143-year history."

It's a sad week for the FDNY: The FDNY is sending some firefighters and members of the Emerald Society of Pipes and Drums Band to the memorial service of nine Charleston firefighters who died earlier this week. And they honored doctors at Bronx Lebanon and Montefiore hospitals who tried to save two firefighters last year.