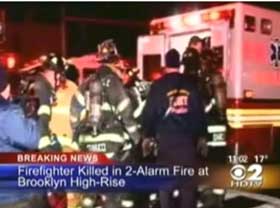 A FDNY lieutenant died as he and other firefighters were battling a fire in Crown Heights. Lieutenant John H. Martinson went into cardiac arrest during the 2-alarm fire on the 14th floor of the Ebbets Field Apartments.

Over 100 firefighters responded to the fire, which was under control around 8:30PM - 75 minutes after the the first call. It's unclear what caused the fire (it's under investigation but does not appear to be suspicious) but the parents and two children ran out of the blazing apartment - and left the door open. The Daily News says that allowed "the fire to spread to the hall." The conditions were very smoky and flames were intense (shooting through windows); one building resident said, "I don't know how they got in [the apartment]. They're supermen." Other firefighters who were on the scene early left to gain more air, but Martinson was apparently unable to get out.

Martinson was a 14-year-old veteran of the Fire Department; before that, he worked for the NYPD for 4 years. The 40-year-old was married with a toddler and was expecting another child. Mayor Bloomberg said, "The year is only three days old and already we are in a hospital in our city paying tribute to a hero who lost his life." Last year, while battling the fire at the old Deutsche Bank building, two firefighters died after going into cardiac arrest when their oxygen supplies ran out.

Here are fire safety tips from the FDNY: One is "WALK QUICKLY, DON'T PANIC - Feel the door on your way out with the back of your hand. If the door is hot, do not open. Close door behind you to slow the spread of fire."