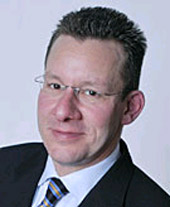 Some more details about the death of the man whose body was found at 6th Avenue and 10th Street in Greenwich Village early yesterday morning. Forty-five-year-old Eric Wishnie had been a producer at NBC News, but was fired last September for alcohol and pill addiction. Additionally, he had been recently estranged with his wife, NBC correspondent Dawn Fratangelo.

The Daily News reports "A couple in a taxi heading north on Sixth Ave. called 911 about 3 a.m. when they heard a loud boom and saw Wishnie's body on the ground." Police initially suspected Wishnie could have been the victim of a hit-and-run, but they were unable to find tire skidmarks or car parts. The Post reports that a witness had called 911 to report that he had seen someone falling from a building, and Wishnie's injuries seemed consistent with a fall.

Friends say he had been depressed lately, but it's unclear whether Wishnie jumped or fell. The ME's office is conducting an autopsy. Police found empty bottles of alcohol and pain medication in Wishnie's apartment at 444 Sixth Avenue. A liquor store employee told the Post, "He used to be bright - lately he had been upset. He asked me to deliver two bottles of vodka to his apartment recently, and I told him this was the last time;" another (or the same employee) said to the News he couldn't sell him alcohol any more, "He looked really weak like he was giving up on everything. I told him he looked terrible. He said, 'Thanks for your concern.'" And Fratangelo's mother Erma Secor told the Sun, "He's just going through a lot. He just didn't care about anything. He's such a nice guy, but you don't know what happens to people."

Last night, Brian Williams dedicated the NBC Nightly News broadcast to Wishnie, saying, "Eric Wishnie died way too young" and that he was an "enormously talented producer and kind and good-hearted soul."