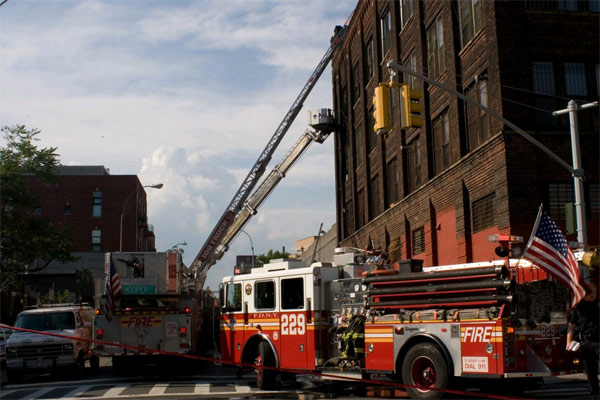 The tragic death of Firefighter Daniel Pujdak, who fell four stories while responding to a fire in Bushwick, has been deemed a terrible accident. But now there are some questions about the factory building that had been illegally allowing artists to live and work there.

The fire, which occurred at 83 Meserole Street/146 Leonard Street, was started when fourth floor resident Karen Vanwart put a lit cigarette on a wooden window sill and left the apartment. A neighbor told the Post Vanwart was upset when she realized a fire had started, "She was in hysterics. I saw her as soon as I got outside. She was pacing around, rocking back and forth," and become even more agitated when Pujdak fell. Her sister told the Daily News, "She's very upset."

Fire officials will probably not charge Vanwart. Pujdak, who was not the usual "roof man" but was covering for a fellow firefighter, was carrying about 130 pounds of equipment, including a 40 pound saw that some believe may have caused him to lose his balance. The News notes that Pujdak was wearing a harness, but the harness was not attached to the ladder. The roof man helps ventilate the roof and checks the four sides of the building; the Post says that the step from the ladder to a building parapet is the most dangerous, especially given the smoke and equipment. Fellow firefighters were quick to point out that Pujdak had trained to do roof work. His captain said, "He was here for two years but he left his mark on the company by his aggressiveness and eagerness. He truly loved this firehouse and we loved him. He will definitely be missed."

And while the building, a former sewing factory, was allowing tenants to live there illegally, it turns out the owner was looking to make it legal. From the NY Times:

In 2000, city records show, Mr. Brach filed plans to convert the building into 15 residential units. His permit was granted. But he never got back to the Buildings Department to request a final approval and a certificate of occupancy, officials said.

Over the last few years, the city issued 13 relatively minor citations to Mr. Brach’s company, mostly for compliance problems with elevators. In a city with a chronic housing shortage, the authorities have been reluctant to shut down illegal lofts as long as a building is relatively safe.

The city’s informal policy when it comes across such a building is to issue violations and give the owner the opportunity to bring it up to code, said a Buildings Department official who spoke on the condition of anonymity because she was not authorized to talk about the policy.

Owner Nachman Brach told the News, "The tragedy was not because of the building or the tenants." Tenants on floor where the fire occurred were given "immediate vacate orders" and the FDNY temporarily evacuated other residents because of fire code violations. One resident who lived beneath the floor of the fire told the Times that Brach's assistant "demanded" that she sign a lease on the apartment, “She should be asking me if I want my ceiling fixed."

Pujdak's family, friends, fellow firefighters and community mourned his death. In his off-duty time, he worked as a personal trainer at the YMCA in Greenpoint, helping a woman who was partially paralyzed in a car accident to walk again. Rene Bouchard told the Daily News, "He just brought light with him wherever he was. He wasn't afraid to challenge me.... I would say he had a tremendous positive impact on my life. I think that everyone is sad when you lose a person who makes the world a better place by being in it"