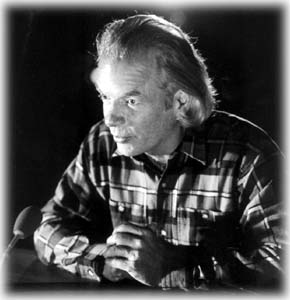 Esquire has a story written by the person who discovered Spalding Gray's body which ends with this quote from Gray's wife, Kathleen Russo: "No, please, do whatever you like. You don't have to be tasteful. This is Spalding Gray. All he ever talked about was his own death."

The 28-year old internet developer, Robin Snead, was with a friend at the Brooklyn waterfront in March 2004 and noticed "some feet poking out from under the pier." Not convinced it was real (partially due to Spalding's leg brace), Snead threw a brick at him that "bounced off and made a sound like it hit a sandbag," and upon getting closer "saw a gash in his side and what looked like gray cotton mattress stuffing coming out."

Gray had taken his own life by reportedly jumping off the side of the Staten Island Ferry in January 2004 and had been missing since. The rest of Snead's story is here and it only gets more gorey, so reader beware!