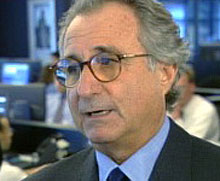 Well, if anything is going to top a prominent lawyer's alleged fraud of $100 million, we guess it would be have to be a prominent trader's alleged fraud of $50 billion. According to authorities, Bernard Madoff (former Nasdaq chairman) told his firm's employees "that his entire business was...'one big lie.'" What's more, the Wall Street Journal reports his two sons were the ones who turned him in to the feds after Madoff admitted he was running a "giant Ponzi scheme."

The Securities and Exchange Commission's associate director of enforcement Andrew Calamari (Calamari!) said, "Our complaint alleges a stunning fraud that appears to be of epic proportions." The criminal complaint suggests that Madoff "deceived investors by operating a securities business in which he traded and lost investor money, and then paid certain investors purported returns on investment with the principal received from other, different investors, which resulted in losses of approximately billions of dollars." Yup, that sounds like a Ponzi scheme! The complaint also says, per employees, Madoff ran the "investment business" on a separate floor and was "cryptic" about it. The NY Times says this might be the largest fraud in Wall Street history.

Madoff had many prominent clients, who found his firm's high returns and low fees appealing. The Daily News reports that Mets owner Fred Wilpon's company had invested with Madoff and may have lost up to $300 million. And some are patting themselves on the back: A hedge fund consulting firm says it told its clients not to invest with Madoff "after learning of 'red flags' at his company, including that its books were audited by a three-person accounting firm...operating out of a 13-by-18 foot location in an office park in New York City’s northern suburbs."

And those friends and neighbors who invested with him—they're totally going to sue.

#Bernard Madoff
#hedge fund
#investment
#ponzi scheme
#trading
Do you know the scoop? Comment below or Send us a Tip