The too-close-to-call Democratic primary race for Queens District Attorney likely won’t be decided and certified for weeks, attorneys for the New York City Board of Elections (BOE) and candidates Melinda Katz and Tiffany Cabán said Tuesday morning in their first Queens Supreme Court appearance over the disputed results. In the meantime, the BOE has begun a labor-intensive manual recount of 91,000 votes, required when the margin of victory is less than one half of one percent of all votes.

“I have confidence in the Board of Elections staff to do this in a diligent and fair way,” Cabán attorney Jerry Goldfeder said at the court hearing, which was held to address dueling lawsuits the candidates have filed, in anticipation of challenging the eventual results of the recount. “If the vote is close—and it’s anybody’s guess as to what the outcome will be—there are additional preliminary invalidated affidavit ballots” that, he said, the BOE should then add to the count.

Preparations for the recount, which is taking place at the BOE’s Queens voting machine facility inside the Metro Mall in Middle Village, include the unsealing of 774 blue plastic ballot bins from across the borough. The recount is expected to begin no earlier than Thursday, and will likely last for “a minimum of ten days, maybe two weeks,” according to BOE attorney Steven Richman. Workers will work ten-hour shifts, six days a week.

Manual recounts tend to catch ballots that could not be read by the scanner on election day, in some cases because the voter circled a candidate’s name, or marked it with an X, instead of filling the bubble next to their name. All such ballots with “clear voter intent” will be counted, Richman said.

Goldfeder says the Cabán campaign estimates that there are about 400 such ballots, based on a discrepancy between the number of voters who signed in at polling places and the number of machine-counted votes. A BOE spokesperson did not respond to a request for confirmation. 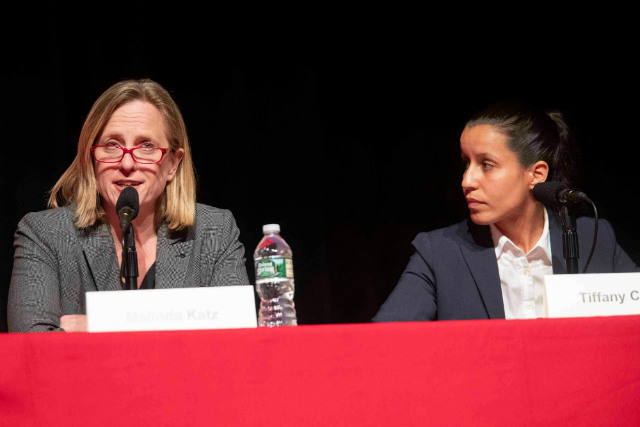 Katz, the Queens Borough President, currently leads Cabán, a public defender, by just 16 votes. Cabán initially declared victory in the six-way June 25th primary, at a time when she was leading by fewer than 1,100 votes. Cabán’s presumed victory prompted a flurry of commentary about her sweeping anti-carceral platform.

But Katz surprised supporters and election experts alike during a paper ballot count on July 3rd, inching ahead by 20 votes. (The margin narrowed to 16 on Friday, when Cabán’s team presented more than 20 affidavit ballots to the BOE for reconsideration.)

Tuesday’s court hearing allowed both campaigns to challenge in court the BOE’s future exclusion of any ballots they deem valid. All parties have agreed to delay litigating any one subset of ballots until the manual recount is well underway.

at Queens Supreme this morning w/ attorneys for @CabanForQueens, @MelindaKatz and the BOE. Attorney for Caban says today’s hearing, over the validity of 114 affidavit ballots, is likely to be adjourned. just learned the judge will be John G. Ingram of Brooklyn Supreme pic.twitter.com/6OcNYNeFV2

The presiding judge, Kings County Supreme Court Judge John Ingram, was appointed to the case on Monday. “I think that the reason that they sent it to a Brooklyn judge was to avoid the accusation that the Queens courts are somehow fixed,” election lawyer Sarah Steiner told Gothamist, adding that the practice is “not that unusual.”

During Tuesday’s hearing, Goldfeder raised the issue of more than 100 affidavit votes he believes were discarded because voters did not write their party affiliation on the ballot envelope. (Affidavit ballots are filled out when a voter’s name does not appear on the voter rolls at a polling site, with the intent that they will be checked later to see if the individual is in fact eligible to vote there.) But a spokesperson for the campaign later lowered that estimate to dozens, acknowledging that other factors could be at play, such as affidavit voters who are not registered Democrats.

Cabán’s team has since distanced itself from King. “I’ve never met Shaun King, I don’t have any interaction with Shaun King,” said Cabán attorney Renée Paradis. “He’s not a part of the campaign…. We haven’t seen any maleficence in this process. We can’t control what people say on Twitter.”

Following Tuesday’s hearing, Queens U.S. representative and party boss Gregory Meeks hosted a press conference in Forest Hills to decry what his office described as conspiracy theories and disrespect for the Democratic process. "Throughout last week, we have seen such misinformation and lies about the results of this election," Meeks told reporters.

“Obviously this is a campaign that a lot of voters feel strongly about, and I think we’re interacting with voters in a fairly standard way,” Paradis replied. “And certainly we’re interested in seeing every eligible vote count.”

Among the dozens of election reform laws to pass in Albany this session, one pertains to affidavit ballots. The bill articulates that all affidavits deemed “substantially” compliant should count. Cabán’s campaign is urging Cuomo to pass it immediately. Cuomo’s office has yet to receive the bill from the Assembly, where it originated. Cuomo’s office declined to comment; a spokesperson for Speaker Carl Heastie did not immediately respond.

now over at the queens voting machine facility, leased in the metro mall in middle village (which, by the way, has a stunning roof view). Prep for the manual recount started at 10 am and is expected to take two days. There are 774 blue boxes of ballots to open, across 16 tables pic.twitter.com/tTvCqDvBrP

Of the roughly 2,800 affidavits cast in the primary, the BOE has designated shy of 500 as preliminarily valid.

Election experts tell Gothamist that the BOE process has been standard and compliant to date. Still, Steiner hopes that the high-profile recount will draw attention to the challenges that New York City voters have long faced.

“I think that a lot of these problems are going to be solved with early voting and electronic poll books,” Steiner said, referencing other reforms passed in Albany this session. “Because that will enable the validation of voters at polls much more easily, and it will give people a lot more time to decide who they are voting for. It just doesn't take effect until the November election.”

#election
#Melinda Katz
#queens da
#Tiffany Cabán
#original
Do you know the scoop? Comment below or Send us a Tip