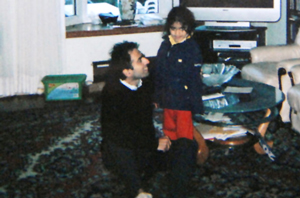 Thrilled that he'd finally won custody of his five-year-old daughter Michelle after a bitter custody battle, orthodontist Michael Malakov asked his father to snap a few pictures of him and his girl just a few minutes before he was killed on a Queens playground. Both the Daily News and the New York Post feature the pictures today, with slideshows of the final photos of Michelle, her cousins, and Malakov.

Later that Sunday, Malakov was killed - moments after he dropped off his child to his ex-wife - by an unidentified man who shot him three times in the chest with a gun bearing a homemade silencer fashioned from a small bleach bottle wrapped in duct tape. Malakov and his ex-wife Dr. Mazoltuv had been engaged in a contentious custody battle, and a judge had recently granted Malakov temporary custody of their daughter. But after her ex was shot at the playground, Borukhova attempted to resuscitate Michelle's mortally wounded father as their daughter looked on.

Police have not named Malakov's ex-wife as a suspect, but his family is accusing the woman or her family of hiring a hit man to kill Michelle's father. Borukhova has retained a lawyer, who says, "Why would she do something like that?"