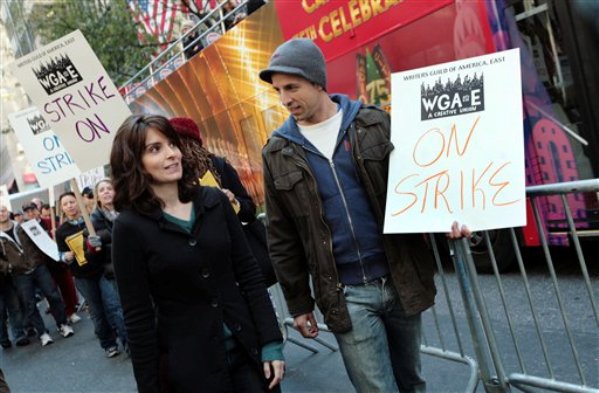 Members of the Writers Guild of America went on strike today after talks between the WGA and Association of Motion Picture and Television Producers collapsed last night. WGA East members are striking outside of NBC headquarters at Rockefeller Plaza on 49th Street today - 30 Rock's Tina Fey, Saturday Night Live's Seth Meyers, and the Daily Show's John Oliver were on the line, as were many other writers for other productions - and other media companies will be targeted this week. Around 75-100 writers strikers were counted, and the NY Times says that their chants were briefly drowned out by the Today Show crowds.

One of the big sticking points in contract negotiations have been royalties from new media and DVD distribution of content. While networks say they haven't made decisions about digital distribution, Fey said, "NBC is breaking away from iTunes. They know what they're doing with new media." That would be a great 30 Rock episode: Liz Lemon on strike with Jack Donaghy in his office, contemplating throwing eggs.

While many shows like 30 Rock and Gossip Girl have enough episodes until January, the talk shows are the hardest hit. Head writer for the Daily Show Steve Bodow lamented, "As we head into the thick of a presidential race, there's great material for us to be writing about," but instead the Daily Show will be in reruns. The Daily Show's Oliver said that Jon Stewart might join the picket line.

The WGA strike rules include "Do not deliver or submit any literary material or any documents to a struck company" and "Inform the Guild of the name of any writer you have reason to believe is engaged in any strike breaking activity or scab writing." And actor Jonah Hill is a victim of the strike - his Saturday Night Live hosting gig for this coming weekend was canceled.