Inside the Halal Guys restaurant on the Upper West Side, Manhattan Borough President Gale Brewer today outlined a series of ideas to help small businesses "survive" and "thrive" in this increasingly corporate retail atmosphere. "Small storefront businesses and vendors create jobs and add value, vibrancy, and diversity to our neighborhoods—New York would not be New York without them," Brewer told reporters.

Brewer's report, "Small Business, Big Impact: Expanding Opportunity For Manhattan Storefronts" (PDF), includes a number of suggestions, but the biggest one is legislation to ease the rent renewal process. Brewer and City Council Small Business Committee Chair Robert Cornegy are proposing that landlords and tenants have "a mandatory, nonbinding negotiation and mediation period...with the option of a one-year lease extension with no more than a 15 percent rent increase to give business the opportunity to transition to a new space smoothly." They also say tenants should be notified of a rent increase 180 days before the end of a lease. 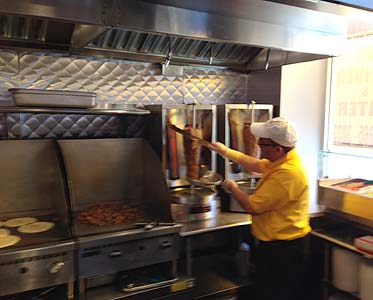 Another proposal is opening up street vending to more people, and that's why the press conference was at the Halal Guys: Founder Muhammed Abouelenein started with his beloved cart at West 53rd Street and 6th Avenue and then grew it to a fleet of carts, and now, two locations (the UWS and on 14th Street) in NYC, plus locations in Chicago, California and in Asia. Abouelenein said that he came to NYC because he knew of the opportunities here to grow a business.

There are currently 853 street vending licenses for merchandise vendors and 3,000 for food vendors; Brewer says the caps should be lifted for more people to be licensed and regulated. She did add that this should happen with "input from the community."

Other ideas: Finding a way to "condo-ize" more storefronts (basically allowing tenants to buy space, as there are federal funds for small businesses to do this); create "low-intensity" commercial districts in areas that have skyrocketing rents (this would be allowing some commercial businesses to open on quieter streets); helping small business owners navigate the thicket of various city agencies; and encouraging the tech community to develop apps to help small business, like alerts about traffic disruptions or construction.

Brewer repeatedly called small business owners—"storefronters"—the "soul of New York.' While there has been a small business lease bill that's been knocking around the City Council for "40 years," as Brewer put it, she and Cornegy said that their legislation is different because it's a little more practical, with the mandatory mediation and one-year lease extension. They want a rent bill, that will be legal in the eyes of the city and Albany, to pass.

Cornegy said the real estate concerns have been receptive about passing legislation. He also recounted some terrible stories about unscrupulous landlords driving out tenants by putting scaffolding outside the business for years to cover up their signage or shutting off water. Brewer also mentioned that she just heard nine storefronts had been evicted between 102nd and 103rd Streets on Broadway by the same landlord.

Jennifer Bergman, owner of West Side Kids, which is basically the Upper West Side's last remaining toy store, was at the press conference to support the proposed ideas. (A sign on the outside of West Side Kids encourages people to shop locally, not on Amazon.com.) She called herself "lucky" because her landlords aren't one of those huge investment firms bent on getting out tenants in hopes of combining the space and landing a corporate tenant. "They tell me, 'We're mom and pop, too,'" Bergman said.

Jeremiah Moss, who launched #SaveNYC, has been keeping Brewer's office in the loop of rent increases that small businesses are facing. When asked if there was a store closing that his her particularly hard, Brewer said, "How far back can I go?... Grossinger's... Big Nick's... my office can get you a list."

#gale brewer
#real estate
#rent
#small business
#original
Do you know the scoop? Comment below or Send us a Tip