After weeks of exchanging insults and taunts, Governor Andrew Cuomo and his Republican challenger Marc Molinaro sat down on Tuesday for an hour of remarkably civil and nuanced policy discussion.

The first and likely only one-on-one gubernatorial debate—'brawl' might be a better way to describe it—was tense, from start to finish. Both candidates stepped on each other repeatedly, and both ignored the moderators and the ground rules limiting rebuttal time.

Cuomo was particularly aggressive. After one string of interruptions, WCBS co-host Marcia Kramer in exasperation told the governor, “Don’t make me punch you.”

The two men sparred over corruption in Albany, President Trump, the MTA, taxes, education and the Buffalo Bills, among other things.

For many New Yorkers, the blistering showdown will be their only chance to see Molinaro speak. With around $900,000 cash in hand, as of a couple weeks ago—a fraction of what Cuomo has raised—Molinaro cannot afford to advertise widely, and especially not in the metro area’s expensive broadcast market.

Perhaps the most heated exchanges were over the ethical scandals that have plagued the state’s capitol, with Molinaro accusing Cuomo of presiding over “the most corrupt state in America.” Molinaro said economic development projects like Cuomo’s signature Buffalo Billion program had produced “more indictments than jobs,” and he pledged to reinstate the Moreland Commission, an anti-corruption panel that Cuomo disbanded while it was still investigating allegations of bribery and bid-rigging.

Cuomo countered that federal investigators had not linked him to any criminal wrongdoing, and that those in his administration who were convicted of corruption, including Joe Percoco, were being punished for it.

Cuomo also accused Molinaro, who has been the Dutchess County Executive since 2012, of having his own ethical problems. Cuomo reiterated charges he’s also made in commercials: that Molinaro’s wife has worked for an architectural firm that does work for the county.

Molinaro accused Cuomo of misrepresenting the job, but wasn’t able to get out his defense until the ‘spin room’ session after the debate: his wife, Corinne, got the entry-level job with Tinkelman Brothers Development Corporation before they were married, and that had nothing to do with the firm’s work for Dutchess County—which it won, he said, through a competitive bidding process. 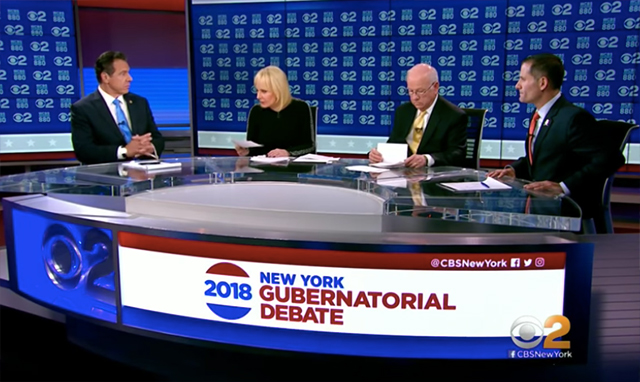 Cuomo’s main line of attack was to try to paint Molinaro as an “acolyte of President Trump” and the “extremist wing of the Republican Party,” and he even tried to link him to former governor George Pataki, the last Republican to hold statewide office.

“You seem obsessed with him,” Molinaro countered.

Accused of opposing abortion, Molinaro said he believed Roe v. Wade is “settled law,” and said his former position on gay marriage “was the same as Barack Obama and Hillary Clinton at the time” but that he celebrated when it became legal.

Molinaro repeatedly refused to say whether he supports or opposes President Trump, saying he would back up the president when he does good things for New York but oppose him when he doesn’t.

He also pointed out that Cuomo has accepted $60,000 in campaign donations from Trump over the years and declined to return it, and added that Trump went to Cuomo's bachelor party. (Trump sent video greetings.)

Asked if he would support the New York Health Act, a bill supported by Assembly and State Senate Democrats that calls for state-led single-payer healthcare, Molinaro said not only could New York not afford it, but he said the prospect of state government controlling healthcare would be “frightening,” when the state “cannot even make the trains run effectively in New York City.”

Cuomo ducked the question about a so-called “Medicare for All” program, instead focusing on Molinaro’s opposition to the state’s health exchange, when he was an Assemblyman.

“They think if you’re rich, you deserve healthcare, and if you’re poor, good luck, don’t get sick,” Cuomo said.

Molinaro said he had grown up with his mother using food stamps, so he knew what it was like to rely on the social service safety net.

“I have never forgotten where I came from,” he said, in between jabs by Cuomo about Republicans’ lack of support for Medicaid. “I wasn’t born on third base.”

“Neither was I,” Cuomo said—before the moderators jumped back in and tried, once again, to get the debate back on track.