Fifty Cent and His Ex Get Court Orders 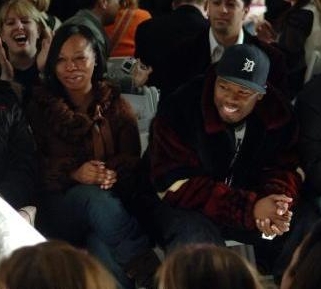 After the roof over her head burned to the ground, Shaniqua Tompkins found herself in court where a Manhattan judge ruled that she owes Fifty Cent $4,500 for May rent that she never paid (previously a judge ruled she owed double that for past due rents). The NY Post reports that she has until Friday to come up with the cash.

"She better pay it by the end of the week. Do you understand?" Edmead told Tompkins' lawyer, Paul Catsandonis, at a hearing yesterday.

Tompkins can't explain where the money went, and noted that "all we have is the clothes we jumped out of the window with."

Officials are still investigating and the May 30th blaze, which they dubbed "suspicious," and the judge ordered Fifty Cent (who is currently on location for a film in Louisiana) to keep the Dix Hills property (which he allegedly purchased for Tompkins and their son). WNBC reports that the rapper was told "to put any insurance proceeds he might receive into a trust account," pending the results of a $50 million breach-of-contract lawsuit Tompkins filed against him earlier this year.

Tompkins has described Fifty as "very violent" and is accusing him of being the firestarter. The rapper wanted her out of the house, and surely a pending suit didn't change his mind -- he has denied any allegations that he burnt down his own property, however. He also recently called in to Hot 97 and talked about Tompkins and the house (prior to it burning down) -- listen here.