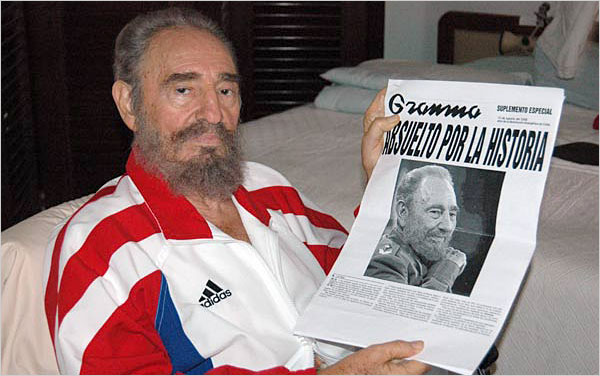 Photograph of Fidel Castro from 2006, proving he was alive after intestinal surgery and wearing an Adidas tracksuit

Cuban president Fidel Castro resigned his position after nearly 50 years of rule. The 81-year-old Castro has been battling illness since 2006, notably turning over power to his brother Raul and other ministers temporarily. Though he was still ruling after his 2006 surgery, Castro was little seen. Now it is expected that Castro's resignation positions Raul Castro, 76, in line for the presidency.

Castro's letter indicating his decision was published in Communist newspaper Granma, where he stated:

To my dearest compatriots, who have recently honored me so much by electing me a member of the Parliament where so many agreements should be adopted of utmost importance to the destiny of our Revolution, I am saying that I will neither aspire to nor accept, I repeat, I will neither aspire to nor accept the positions of President of the State Council and Commander in Chief...

...it would be a betrayal to my conscience to accept a responsibility requiring more mobility and dedication than I am physically able to offer...

This is not my farewell to you. My only wish is to fight as a soldier in the battle of ideas. I shall continue to write under the heading of ‘Reflections by comrade Fidel.’ It will be just another weapon you can count on. Perhaps my voice will be heard. I shall be careful.

President Bush, who is traveling in Rwanda, said, "The United States will help the people of Cuba realize the blessings of liberty," and asked Cuba to release political prisoners. Bush also hopes for a "transition to free and fair elections. And I mean free and fair. Not these elections that the Castro brothers rig."

Cuba's Council of State is supposed to pick a new president during its next meeting, scheduled for Sunday. The U.S's brushes with Cuba were at their most tense during the Bay of Pigs and the Cuban Missile Crisis (listen to audio from JFK's office). For more about Castro, here's a Wikipediia entry, the BBC's profile of "A Great Survivor," and information from the PBS American Experience program Fidel Castro website. And Castro never tried out for the New York Yankees or Washington Senators.