Today is the runoff election for Public Advocate, which features City Council Member Letitia James and State Senator Daniel Squadron vying for the position. And even though it's a very high-ranking city position, turnout is expected to be only as high as 200,000 or as low as 100,000. The whole thing is costing taxpayers $13 million, so if you vote today make sure you get your $130 worth!

While the Public Advocate doesn't really wield any power and has a budget of just $2.3 million, the position is the first in the line of succession if something happens to the mayor and also has the power to audit city agencies. It's also a stepping stone for greater ambitions—the first Public Advocate Mark Green ran for mayor in 2001, and current Public Advocate Bill de Blasio leads in mayoral polls this year. 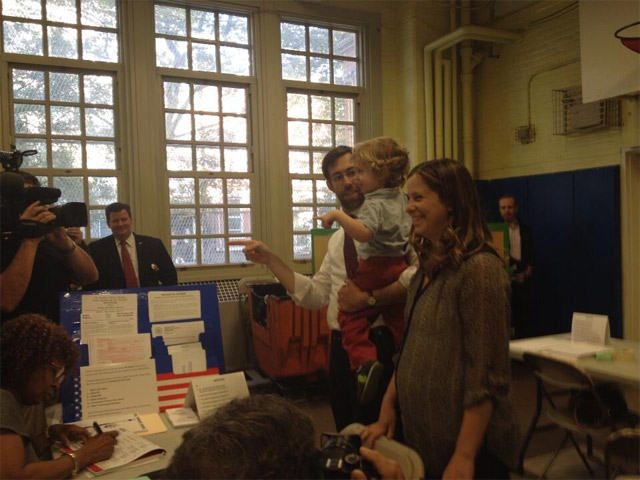 The 2009 Public Advocate runoff election between Green and de Blasio had a turnout of 233,000. This year, the Daily News reports, "City Board of Elections Executive Director Michael Ryan said the agency is estimating a turnout of perhaps 100,000 of the city's 2.8 million registered Democrats." FWIW, de Blasio has declined endorsing in this race, saying that both are friends.

The two candidates are pretty similar—see our guide to the race—so they have tried to beat each other up on very specific issues. Last night, NY1's Errol Louis questioned Squadron about a questionable robocall that went out (see it). Squadron didn't deny it was from his campaign, so Louis said, "Because you’re not answering the question I’m gonna assume that your campaign put out that anonymous robocall and I think most of our viewers are going to assume the same thing. Are you okay with that?" To which Squadron answered, "Uh, look, people will assume what they want to assume…"

The polls close at 9 p.m., so there's still time to vote!

#daniel squadron
#election
#Election 2013
#letitia james
#nyc 2013
#public advocate
Do you know the scoop? Comment below or Send us a Tip