This weekend, New York's "sexiest street festival" returns to West 28th Street between 10th and 11th Avenues for its eighth year on the block (and 16th year running). But the Folsom Street East fest (named after the famous SF fetish street festival) is going to be a little different this year. After neighbors in a fancy new condo on the block complained about having their sensibilities offended, organizers have agreed to build a wall to protect their precious eyes. Oh the humanity!

A neighbor in the nearby +art condo explained their concerns to Jeremiah's Vanishing New York like this:

The primary issue for us at 540 W 28th isn't the Eagle or even Folsom Street East. It's allowing residents access to the building without having to go through the fair itself. Other residents of the surrounding buildings and even my own building may have additional concerns with regard to the lewd conduct and nudity in full view from their units.

Or, as another neighbor put it in a letter to CB4 about the fair: "Even as a gay man, I was thoroughly embarrassed and offended by what I saw [last year]. How can a street fair that is based on a sexual fetish be allowed in a neighborhood where there are at least three large residential buildings with children in viewing distance?"

And so, rather than fight with their new neighbors, organizers are taking the high road and doing what they can to be good neighbors—even if they were most definitely there first and in fact full nudity and sex acts are strictly verboten at the fair. "From 11th Avenue to their doorway, we'll create a corridor against the building," Susan Wright, a spokeswoman for the fair, told DNAinfo. How nice of them.

Sigh. Between this and the High Line neighbors hating on High Line tourists, the fast-moving gentrification of the Meatpacking District has had a rough go of it lately, eh? 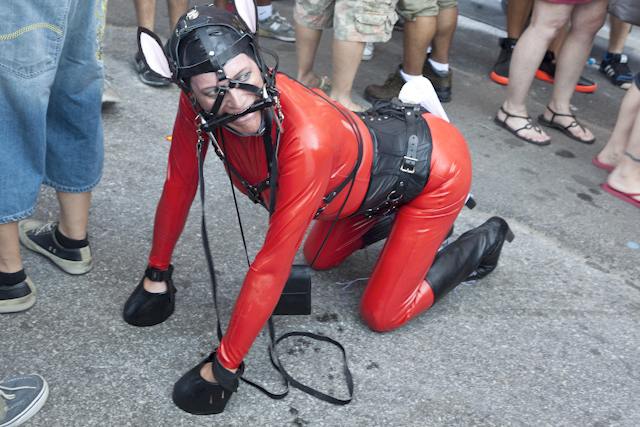