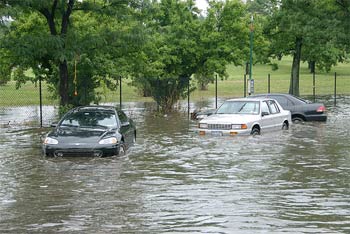 The Federal Emergency Management Agency announced that President Bush had signed a "major disaster declaration" for Queens on August 8, the day the weather (including a tornado in Brooklyn and Staten Island) caused much of the city to come to a standstill. This means that Queens residents and business owners will be able to apply for disaster relief.

Some New York residents had been angry that the President was taking so long to sign off on disaster relief for the boroughs. In fact, Bush had managed to declare Midwestern states that suffered flooding and tornado damaged on August 18 sooner. But the AP reported Representative Joseph Crowley was happy with the decision; he said he had 2 feet of water in his basement.

Residents and business owners who sustained losses in can go to FEMA.gov and apply for assistance starting today. NY State also applied for federal assistance for the parts of Staten Island Brooklyn hit by the tornado, but that has yet to be approved. According to Senator Schumer, Queens was able to get aid first because many residents do not have flood insurance. Plus, Queens was harder hit: There were over 1300 damaged properties in Queens, while there were 189 in Brooklyn and 21 in Staten Island.

NY1 reports that City Councilman Vito Fossella believes FEMA analysis of Brooklyn and Staten Island will be completed next week.