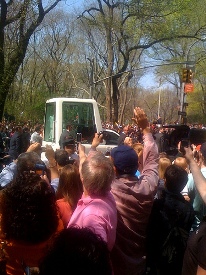 Now that Pope Benedict XVI has left NYC, it's time to pay the NYPD overtime bills. According to the NYPD, the State Department will reimburse the city for 50-60% of the costs associated with making sure the pope was safe throughout his 3 days in the city.

While the exact total will be released soon (Pope John Paul II's 1995 visit cost $4 million in overtime), Mayor Bloomberg emphasized, "This is one of those things were the expenses are relatively negligible, virtually impossible to measure, but the benefits will go on for a long time." Also, the NYPD's $5.5 billion budget does have money set aside for events like this. Last year, the State Department reimbursed the city $8 million of the $15 million spent for security for visiting heads of state (it's all part of the "moderately effective" Protection of Foreign Missions and Officials Program).