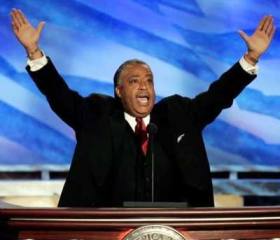 At 6:30AM yesterday morning, federal agents delivered "wake-up" subpoenas to the Reverend Al Shaprton and four of his employees at the National Action Network. The FBI and IRS are looking for financial and corporate records, some dating back to 2001, as part of an investigation into Sharpton's financing of his 2004 presidential campaign as well as allegations of tax fraud.

Ten people in total were subpoenaed, including a former chief of staff who left in 1998. Carl Redding told the Daily News, "It was like a sting or a raid. They converged on everybody.” Naturally, Sharpton is angry, as he denied any wrongdoing. From the Post:

Here we go again," said Sharpton, who claimed that prior probes have suspiciously come to public light when he was in the midst of making political moves. "This is more smearing.

"I'm getting ready to make a presidential endorsement," noted Sharpton, who sought the Democratic presidential nomination in 2004.

"How many state and federal investigations have you been through with me? Whatever it is, it's part of the territory. I'm a public figure."

This morning, at the National Action Network's headquarters, Sharpton said, '“Every major civil rights leader I can think of — from Martin Luther King Jr. to Marcus Garvey to Adam Clayton Powell — has had to face this kind of harassment. I certainly am not in their league, but I certainly expected that that would become my lot.”

Recently, the Detectives Endowment Association suggested that Sharpton was "purchasing testimony" for witnesses and survivors in the Sean Bell shooting, but the National Action Network has said it's supporting the victims through victims compensation funds. And back in 1993, Sharpton pleaded guilty for failing to file a tax return in 1986, which is a misdemeanor.