The brash and widely-despised pharmaceutical CEO Martin Shkreli orchestrated a "web of lies and deceit," U.S. Attorney Robert Capers said in a press conference after Shkreli's arrest today. "His plots were matched only by efforts to conceal the fraud, which led him to operate his companies, including a publicly traded company, as a Ponzi scheme, where he used the assets of the new entity to pay off debts from the old entity."

Shkreli, a 32-year-old apparent wunderkind, had founded a hedge fund, MSMB Capital in 2009. The feds allege that MSMB Capital was failing—with only $700 in its accounts while Shkreli claimed it had $35 million— and, based on various lies, Shkreli got another $3 million in investments.

After abandoning MSMB Capital, Shkreli then created MSMB Healthcare and Retrophin Pharmaceuticals, for the alleged purpose of paying back MSMB Capital investors. Andrew Cereseny of the Securities Exchange Commission said, "Shkreli committed fraud in nearly every aspect of his hedge fund managing." 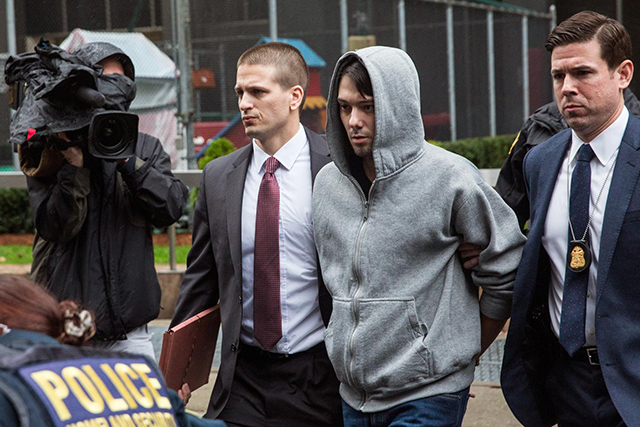 Prosecutors also claim that his outside counsel at Retrophin, Evan Greebel, was also part of the conspiracy. FBI Assistant Director-in- Charge Diego Rodriguez said, "Shkreli targeted investors and retained their business by making several misrepresentations and omissions about key facts of the funds he managed. He continued to lie about the success of the investments and used assets from Retrophin to payoff MSMB investors. In the end, Shkreli and Greebel used a series of settlement and sham consulting agreements that resulted in Retrophin and its investors suffering a loss in excess of $11 million." 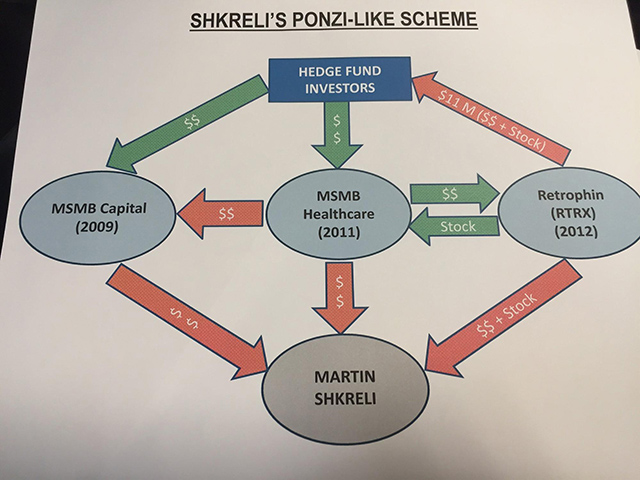 The DOJ's diagram of the scheme (Rebecca Fishbein / Gothamist)

From the U.S. Attorney's description of the Retrophin scheme:

On October 16, 2013, when Shkreli initially questioned this new approach, Greebel explained, “We can call it a settlement agreement, but given [the auditor’s] recent behavior they may require it to be disclosed in the financials. I was trying to prevent that issue.” Between September 2013 and March 2014, Shkreli and Greebel caused Retrophin to enter into four sham consulting agreements with defrauded investors from the funds. Retrophin did not receive any legitimate consulting services based on these sham agreements, but paid more than $7.6 million in cash and RTRX stock to settle claims that the auditors had previously determined were not the responsibility of Retrophin.

Shkreli left the company earlier this year and founded Turing Pharmaceuticals and, infamously, raised the price of Daraphim from $13 per pill to $750 per pill. Capers said it was unclear if Shkreli had hiked up the price of the drug, which is used to treat toxoplasmosis in cancer and AIDS patients, to pay back debts.

Retrophin filed a $65 million civil lawsuit against Shkreli in August.

At today's press conference, someone predictably asked about the Wu-Tang Clan album that Shkreli paid $2 million for. Capers laughed, "I was wondering when someone would ask about that," and said, "We’re not aware of where he got the funds for the Wu-Tang album."

Shkreli and Greebel each face a maximum prison sentence of 20 years if convicted. Capers also said that the investigation was continuing and more arrests were probable.

UPDATE: The FBI is not in possession of the Wu-Tang album.

#Breaking no seizure warrant at the arrest of Martin Shkreli today, which means we didn't seize the Wu-Tang Clan album.

#evan greebel
#martin shkreli
#msmb capital
#ponzi scheme
#retrophin
Do you know the scoop? Comment below or Send us a Tip