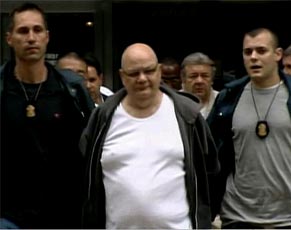 Twelve members of the Colombo crime family, including its acting boss, were charged with 17 counts brought forth by the U.S. Attorney's Office, including "racketeering, murder, robbery, extortion, narcotics trafficking, and loansharking." Nine were arrested during Wednesday morning raids.

The big arrest was of Thomas "Tommy Shots" Gioeli, who has allegedly been the acting boss while Carmine "The Snake" Persico has been in prison. Gioeli is accused of helping carry out the 1992 double killing of a "Colombo soldier John Minerva and his friend, Michael Imbergamo," because Minerva had supported Vittorio "Vic" Orena's coup for Colombo family power when Persico went to prison. Ah, family-infighting.

The Daily News reviewed Gioeli's arrest fashion, noting his "rumpled white T-shirt, a slouchy gray hoodie and basketball shorts" and suggesting "Gioeli couldn't even muster a matching jogging suit." (Gioeli's lawyer said he was arrested too early in the morning.) Gioeli is also charged with the 1991 killing of Frank "Chesnut" Marasa, to avenge another Colombo murder, and a 1991 robbery where he posed as a Valentine's Day customer at a fur store but ended up leaving with garbage bags of coats.

Earlier this year, the feds arrested 62 members of the Gambino crime family. The other "Five Families" families are the Genovese, Lucchese and Bonanno.