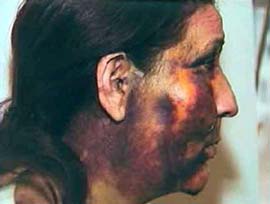 An 8-year veteran of the Yonkers police department was arrested for allegedly "body-slamming" a woman at a restaurant in 2007. Wayne Simoes was arrested and charged, per the U.S. Attorney's office, "with violation of federal civil rights laws" because it's illegal to for law enforcement to use "excessive force..the course of an arrest, stop, or seizure."

In March 2007, Irma Marquez's niece, who was hit with a bottle at La Fonda restaurant, was being treated by EMTs. Marguez, a health aide, was also trying to attend to her niece. According to WABC 7, the surveillance footage shows one cop trying to gently push her away. After she bumped into another officer while backing up, Simoes "approaches the woman, shoves her shoulder, and, after she apparently objects to being touched, suddenly grabs her from behind and throws her to the floor."

Marquez was thrown face first into the tile floor; she was in the hospital for four days, with a broken jaw and intense bruising on her face. Simoes was found to be doing his job while Marquez was arrested with obstruction of government administration and even tried this past May, despite her defense lawyer telling the Westchester DA's to look at the video (a jury acquitted her).

Now, with the federal prosecutors involved, other cops admitted that they saw Simoes throwing Marquez on the ground before handcuffing her and Westchester DA Janet DiFiore suggested the case was mishandled. Simoes could face a $250,000 fine and up to 10 years in prison if convicted.