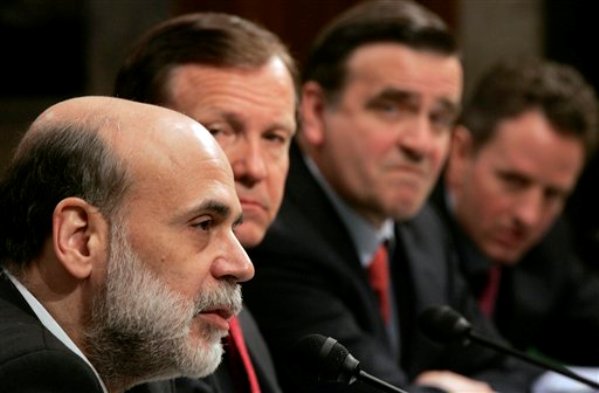 New York Federal Reserve Bank President Timothy Geither told lawmakers today, "What we were observing in U.S. and global financial markets was similar to the classic pattern in financial crises," as Federal Reserve officials defended why they helped JP Morgan rescue Bear Stearns from collapse. Fed chairman Ben Bernanke told the Senate Banking Committee, "Given the exceptional pressures on the global economy and financial system, the damage caused by a default by Bear Stearns could have been severe and extremely difficult to contain."

Committee chairman Christopher Dodd had asked, "Was this a justified rescue to prevent a systemic collapse of financial markets or a $30 billion taxpayer bailout for a Wall Street firm while people on Main Street struggle to pay their mortgages?" JP Morgan head Jamie Dimon said, "A Bear Stearns bankruptcy could well have touched off a chain reaction at other major financial institutions. that would have shaken confidence in credit markets that already have been battered."

Bear Stearns CEO Alan Schwartz said that if the Fed had helped sooner, Bear could have avoided its current situation. Hindsight is 20/20--Bear layoffs are expected to begin in a week or so.

#bear stearns
#economy
#federal reserve
#jp morgan
Do you know the scoop? Comment below or Send us a Tip