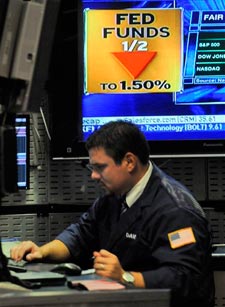 The Federal Reserve announced that it was cutting the interest rate to 1.5% from 2%: "The Committee took this action in light of evidence pointing to a weakening of economic activity and a reduction in inflationary pressures."

The press release also noted that other central banks from around the world were also "easing...global monetary conditions"--the Bank of Canada, the Bank of England, the European Central Bank, the Federal Reserve, Sveriges Riksbank, and the Swiss National Bank also announced interest rate cuts while the Bank of Japan also supported the action (Japan's interest rate is already 0.5%).

Derek Halpenny, currency srtategist at Bank of Tokyo-Mitsubishi UFJ, told the NY Times, "There’s no silver bullet for these problems. But the actions by the Fed on Tuesday, the U.K. government’s bailout plan today and the bit-by-bit approach European governments are taking show the authorities are getting more proactive.”

Today, U.S. stock index futures momentarily surged after the surge was announced, but CNBC is now reporting that the Dow and Nasdaq will open lower, and the S&P 500 may open slightly higher. Yesterday, the Dow fell 508 points/5%. Bloomberg News points out that this is the U.S. stock indexes' biggest annual decline since 1937.