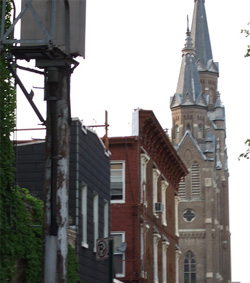 Toxic vapors are intruding into Greenpoint homes, and the New York State Department of Environmental Conservation is having difficulty assessing the problem because many residents will not allow their homes to be tested, according to a scary report in the Times today. The vapors in question are not wafting from the famous oil plume in Greenpoint's groundwater that went undetected until 1978, but are believed to be left over from other businesses that no longer operate in the neighborhood.

An investigation last February discovered that the air in two homes was contaminated with traces of tetrachloroethene, also known as PCE or perc, and trichloroethene or TCE, manufactured chemicals used for dry-cleaning fabrics and degreasing metal parts. In eight other homes, investigators found the same chemicals under the foundation, but the air inside was not (yet) contaminated. According to the Health Department, the side-effects of PCE or TCE exposure range from dizziness and headaches to organ damage and increased risk of cancer. Next year the Health Department will examine cancer rates and birth-related problems of residents near Newtown Creek.

The number of homes with bad air may be much larger, but investigators have only gained access to 12 residences, far less than the 58 homes that were chosen for inspection. Some residents are barring the inspectors out of fear that their homes may be condemned or property values adversely affected by the vapor intrusion. (The homes that tested positively for vapors were repaired so that the air was no longer contaminated; residents were not evicted and were allowed to stay at home during the work, which the state paid for.) Over the summer, the E.P.A. began studying the area to determine if it qualifies for Superfund status. As Councilman David Yassky tells the Times, "This community has just had one environmental hit after another, and the hits just keep coming."