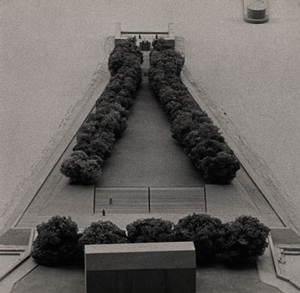 Long-held plans to build a memorial to FDR on Roosevelt Island may finally be coming to fruition, although not everyone is pleased. Welfare Island in the East River was renamed Roosevelt Island in 1973, anticipating the installation of a memorial to Franklin Delano Roosevelt that had been in the planning stages since 1970. The renaming was probably also welcomed by future residents of the island's first residential housing that would open in 1976. Famed architect Louis Kahn completed his design for the memorial that would be installed at the southern end of the two-mile island shortly before his death in 1974. Before the memorial could be built, however, the city entered a period of deep fiscal crisis and building a new park or memorial was deemed out of the question. A fund-raising effort recently began so that the memorial could be built on the 35th anniversary year of the island's renaming.

The New York Sun reported yesterday that the Franklin and Eleanor Roosevelt Institute hopes to raise $40 million by the end of the year and finally realize Kahn's design. An adjacent park is already planned to be built next to the planned memorial and backers including Gov. Spitzer hope that fund-raising will be completed in time so that both the memorial and the park can open simultaneously. An anonymous donor contributed $2.5 million to the project shortly after Spitzer wrote a letter to the institute urging to reach its end-of-year goal. The Sun describes what the memorial would look like:

Visitors to the finished memorial would be greeted by a grove of copper beech trees at the outset and then could walk along one of two shoreline promenades or climb a set of stairs to reach an elevated grass field flanked by littleleaf linden trees.

The lawn would slope downward and the promenades upward, with all three paths meeting near the tip of the island, facing a bust of Roosevelt. Just beyond would be the open-air "four freedoms room," named after a speech the president delivered in 1941. The room would have only two walls.

Not everyone is happy about the prospect of FDR finally getting his long-delayed memorial, including Roosevelt Island residents who are worried about losing a large piece of open parkland on the tiny island to a memorial of stone and blocked views to the east and west. Officials at the Roosevelt Island Residents Association are hoping to keep that portion of the island as green as possible and are hoping that fund-raising will fail or something else will continue to derail the realization of Kahn's FDR memorial vision.